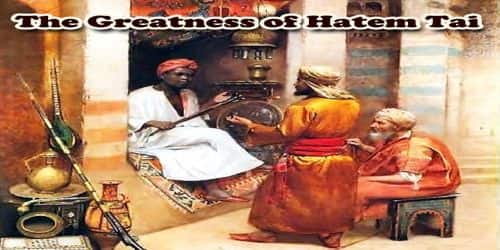 The Greatness of Hatem Tai

Long, long ago, there lived a very kind and generous man, called Hatem Tai in Yemen. He gave away his riches to the poor and distressed. The people loved Hatem Tai and praised him more than the king of the country. So the king became jealous of Hatem Tai and wanted to kill him. The king sent his soldiers to kill Hatem Tai. But Hatem Tai left his palace and riches and went into hiding in a forest. Failing to catch Hatem Tai the king declared a handsome reward of one thousand gold coins for catching Hatem Tai. A woodcutter and his wife were taking rest sitting beside a bush. They didn’t know that Hatem Tai was hiding in the bush. The wife said that if they could arrest Hatem Tai, they would get the reward and become rich. Hearing this Hatem Tai said to himself, “I have nothing but my own life to give them.” So he surrendered to them. The woodcutter was very honest and refused to take Hatem to the king. In the meantime, five armed men came and took away Hatem from them. The woodcutter and his wife also followed them.

Everybody claimed to the king that he had caught Hatem. But Hatem said that it was the woodcutter and not the other people who caught and brought Hatem Tai to the king. He requested the king to give the promised money to the poor woodcutter’s family so that they would live in peace. The king heard everything from the woodcutter. He said, “I am proud but you are kind and humble. I am defeated by you. As long as you live please stay in my court and do good for my subjects. You are free to do anything you like for the welfare of my kingdom.”