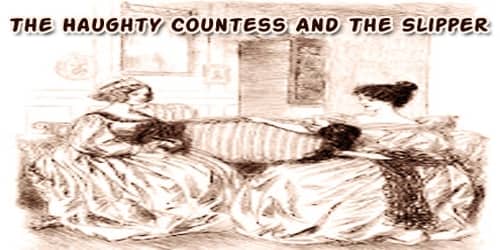 The Haughty Countess And The Slipper

Once in Denmark, there lived a rich gentleman, a widower, with an only daughter about ten years of age. The count possessed large estates by inheritance from both his parents, and his little daughter also was an heiress to the fine property both in city and country, from her dear, dead mother. The different suites of the house servants, laborers, and tenants were all comfortable and happy with their master, whom they regarded as the perfect standard of a nobleman. The little daughter was loved by them all, and they looked forward to her coming years of womanhood with fond pride. Little Thyra was happy, for she had as governess and companion a gentle, Christian lady, her mother’s own cousin, but in humble circumstances, and the two were much attached to each other.

It had long been said that it was a pity the fine house should be so quiet, for since the death of the lovely countess, Olga, six years before, no festivities had filled the great house, and the few figures that graced the elegant lawns, gardens, and drives, were those of the count and his little household. At last, it was told that their master was about to choose a bride, and close attention was paid to discover whom he seemed most to admire. After a while it was thought that he paid most attention to a certain elegant lady (also a countess), very handsome and wealthy, but so imperial in her bearing toward even her equals that this prospect was met with a lack of that enthusiasm and pleasure that often prevail among the dependents of a noble family. Then it was announced that a fine ball was to be given by the count, at which, it was hinted, he would make known the lady of his choice.

Of course, great interest prevailed, and many were the onlookers as the carriages rolled to the ancient mansion in the ancient park beside the lake. The grounds, as well as the house, were illuminated, also the boats upon the water, from which bands discoursed sweet music echoing back to that in the dancing-hall. Little Thyra stood beside her father until all the guests had been welcomed, then wandered to the side of the governess, who had been invited to be present in attendance upon her. A little while before supper was announced, the beautiful countess, who prided herself that she had already received marked attention over all other ladies, from the master of the house, began to display unusual vivacity of spirit. All at once she noticed that the silken string of her embroidered satin slipper was loose, and, seizing this opportunity to display her power, called to the little Thyra, as she stood with one foot imperiously forward: “Come here, child, and tie my shoe-string.”

Thyra looked up into the proud beauty’s face calmly but made no movement. The countess regarded her with heightened color and flashing eyes that boded ill for the future happiness of the child. “Come here, you silly little goose, and tie the string of my slipper.” While many gazed in quiet surprise, and Thyra looked suffused with shame, thus addressed, the governess left her seat, and, advancing, knelt before her: “I will tie your slipper-string, my lady.” The baffled countess replied so low that few heard her: “You will not be here long; you have trained that child, but I will humble her.”

Thyra paled at the thought of a separation from her kind governess but said nothing. The count was a silent witness and faintly smiled, none being able to discover his thought. When, a few moments later, he spoke to Thyra, her eyes drooped and filled with tears, but she overcame the emotion and was calm as before.

Strangely, it seemed to all, the count took his little daughter to the table and seated her at his left hand with her governess next below her. “Ah!” whispered the guests, “he will make known his choice when the dancing begins.”

The supper passed merrily to its end when the count spoke: “My friends, I have promised to make known to-night the lady whom I have chosen to grace my house, bless my life, and be a mother to my child.” With these words he arose, and, extending his hand to the governess, asked, “Will you accept the trust?”

Little Thyra caught the trembling white hand, and, with pleading, brimming eyes, placed it in her father’s, who lifted it to his lips, then, drawing it through his arm, passed from the room with the gentle lady and Thyra to the grand dancing-hall. When all were seated, it was observed that the haughty countess had vanished.

It needs hardly to be told that, through all the count’s broad estates; there was rejoicing at the wisdom of his choice. Countess Caroline adorned her new position with the same gentle grace that had won the respect and affection of the household when herself in a dependent position, and the ardent love of the gentle child, to whom she had been teacher, friend, and guide.

The choice bridal gift of pearls from her husband was truly appropriate to the purity of her spirit, and the radiant faces of her husband’s tenantry showed how fervent was their welcome. As they left the church, the gentle shower that had come, passed away, and before them, over the park and the ancient mansion, a rainbow rested like a triumphal arch through which they should pass, and like a benison of heaven. The happy people roundabout at sight of the sign lifted their voices in unison in expressions of delight at the happy and beautiful women, so full of promise and of peace; but what the haughty countess thought at her window far away, none ever heard or cared to know.