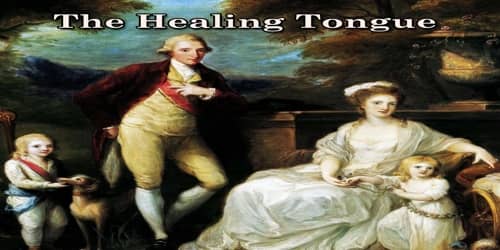 Many years ago a great chief lived with his wife and son and daughter in great wealth and comfort. But the chief’s two children were unhappy. They wandered through the village, yawning and weeping, and they never smiled or played with other children. They grew so thin, they looked almost like skeletons. Their eyes, so dark and haunted, frightened the small children and old people.

In the village, there also lived a poor man whose two children were always glad. All-day long they sang songs and played joyfully with their friends. They smiled day and night, and their skin was soft and smooth, their limbs plump and strong. Their eyes gleamed with light, and everyone who knew them loved them.

When the chief saw how healthy and happy these poor children were, he called upon their father.

“Tell me why your son and daughter are so happy and healthy. Mine are sad and weak, though I give them everything they wish.”

“Chief,” said the poor man, “I feed my children with the meat of the tongue, and this fills them with health and happiness.”

The chief was delighted at this simple solution. He hurried home and ordered his servants to fetch him tongues of every beast. He instructed his cook to prepare tongue roasts, tongue stews, tongue soups, tongue fried and boiled and grilled. These treats he fed to his children, day and night.

Still, the chief’s children would not smile. They grew thinner and paler and their eyes filled with tears.

The chief was at his wit’s end. Once again he called upon the poor man. “You have given me bad advice,” the chief said angrily. “Your punishment is this. You must give me your children, and I will give you mine in exchange.”

In the village the chief’s word was law, and the poor man, though he was sad, could not argue. He gave up his beloved son and daughter, and the chief’s unhappy children moved into the poor man’s home.

Time passed, and the chief’s new children began to grow sad and thin and pale. The chief offered those toys and games and jewels, and still, they would not smile. The chief ordered marvelous birds in golden cages to sing to the children, but the children would not listen or sing. No matter how he tried, he could not bring happiness to his new children, and he watched in horror as they grew more and more listless.

The poor man went about his work each day. Each evening he returned home and talked with his new son and daughter as they ate their evening meal. He told them tales of the wonders of the world. He described the rising sun, and he talked about the stars and the moon. He drew pictures of the fields where he worked, and when the children were ready to go to bed, he sang them songs until, with smiles upon their faces, they fell fast asleep.

Soon the poor man’s new children were smiling. Within days they began to laugh, and soon they were singing and gaining weight. The color came to their cheeks, and they woke with a sparkle in their eyes. They played with the other children in the village. The poor man’s new children were happy indeed, for they loved the tales their new father told them. They loved the way he shared his knowledge and the stories of his ancestors.

The chief, meanwhile, grew weary of trying to please his new children. He packed their bags and sent his servants to return them to their father, asking that his own children come home in return.

When the servants arrived at the poor man’s home, the chief’s children greeted them with a friendly smile. “Hello, come in,” the chief’s daughter smiled. “Welcome to our happy home,” said the chief’s son.

“We’ve come to take you back to your father,” the servants said. “The chief wishes you to be his children again, and he will give you any gift you wish.”

But the chief’s children shook their heads. “No,” said his daughter. “I’m happy here listening to the tales of the world and hearing our new father’s songs.” “We do not wish to return to our father’s home,” said the son.

The servants returned to the chief and told him what the children had said. The chief was furious, and he ran all the way to the poor man’s house.

“Children,” he cried, amazed at the change in his daughter’s look, at the joy he saw in his son’s eyes. “What has this poor man do? How is it that he has made you so happy?”

The chief’s children told him the tales the poor man had told them. They described the sun and the moon and the stars, and they sang the songs they had learned. The chief listened, and suddenly he understood. “The meat of the tongue,” he said, nodding, taking the poor man’s hand in his. “You are a wise man, indeed,” he said, “for you know the greatest gift a parent can offer his children is his companionship, and his wisdom, and his words. You have taught me well.”

The chief’s children, seeing that their father understood, returned to their home, and forever afterward, the chief gave his children the greatest gift imaginable. He gave them his love and attention and filled their lives with songs and stories.