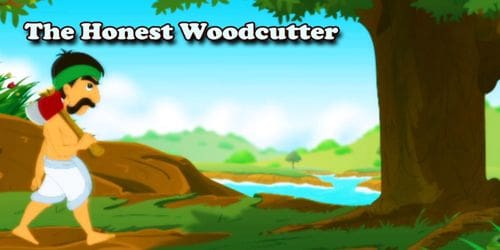 Once there lived a poor woodcutter. But he was very honest. He earned his livelihood by selling wood in the market. One day while he was cutting wood beside a river, his axe slipped out of his hand abruptly and fell into deep water. He became very sad as he would not be able to cut wood any more to earn his living and maintain his family. He sat beside the river and began to cry bitterly. Seeing this, the river goddess took pity on him. The Goddess appeared in front of him and asked, “What is the problem, my son?” The woodcutter explained the problem and requested the Goddess to get his axe back.

At this, the goddess became very much pleased at the poor woodcutter’s honesty and devotion to truth. So, she gave him his iron axe and also other two axes as a reward for his honesty. He sold the silver and gold axes in the market, got a huge amount of money and became a rich man. He thus began to live a happy life.

Moral of the story: ‘Always be honest.  Honesty is always rewarded.’