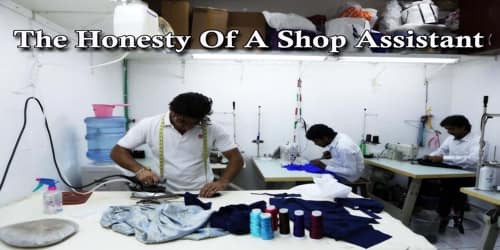 The Honesty Of A Shop Assistant

Long, Long ago, there was a cloth trader who did business in a shop in a faraway market. His home was two or three districts away. He had a boy shop assistant who did not know where his master’s home was. One day, on some emergency, the trader quickly left the shop for home entrusting the boy with his business for a few days. Days, months, years passed by but there was no see of his master. The boy could not think what to do. At first, he tried to collect the address of the owner. Then he went to a nearby village and asked almost everyone about the man. But all his attempts were fruitless. Nobody could help him by giving any kind of information about the missing trader. As the assistant of the trader, he had learned everything about the business. He had learned how to make clothes and where to sell them. Thus he continued the business honestly, courageously and attentively.

Next year he bought another shop and extended his business. In this way the boy became rich. Five years later, one day while the boy was working in his shop he found a long-bearded man with shabby clothes standing in front of the shop. At first, he could not recognize him but when the man started talking with him, he was wondered. The man was none but the owner of the shop. The assistant embraced him and asked him what had happened to him and where he had been all these days. The man told him that he had met an accident and thus lost his memory. Last month he regained his memory and could remember everything. The assistant showed him the progress of his business and the trader became very pleased with him. Thus the assistant proved himself to be a great-hearted man.