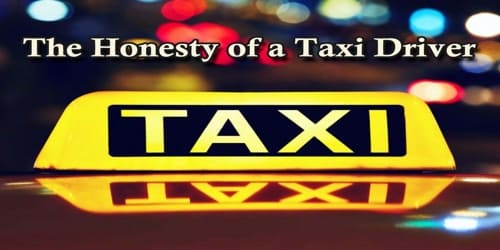 The Honesty of a Taxi Driver

One day a passenger was going to Kamalapur Rail-Station by taxi. He had a purse with him. It contained a good amount of money. The man was in a hurry to get the train. Before getting down from the taxi, he paid the fare. But at the time of putting the purse back into his pocket, it slipped and got into the vehicle. The man rushed to the ticket counter to buy a ticket to catch the Chittagong-bound train which starts at 6.30 Pm. When he put his hand into his pocket to take money from the purse he found his purse missing. He was at a loss. He did not know what to do. Then he remembered about his taxi journey. He quickly returned to the taxi stand. He searched for the taxi in which he came here. He talked to the other taxi drivers present there. But all his attempts failed. He thought about all the things kept in his purse; his air ticket, money, driving license, passport, credit card, and some dollars. He thought he lost everything. He felt very upset.

Then he got a call on his mobile. He recognized the voice. It was the taxi driver. The driver contacted the owner of the purse over the mobile phone. The man instantly came to the driver’s address and met him. The driver handed over the purse to the man. The man could not think anything. The driver’s honesty moved him greatly. He expressed his gratitude to the driver. He thought such honesty must be rewarded. So he rewarded the driver with ten thousand taka.