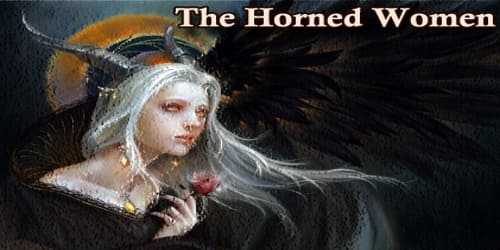 A rich woman sat up late one-night carding and preparing wool, whiles all the family and servants were asleep. Suddenly a knock was given at the door, and a voice called, “Open! Open!”

“Who is there?” said the woman of the house.

“I am the Witch of one Horn,” was answered.

The mistress, supposing that one of her neighbors had called and required assistance, opened the door, and a woman entered, having in her hand a pair of wool-carders, and bearing a horn on her forehead as if growing there. She sat down by the fire in silence and began to card the wool with violent haste. Suddenly she paused, and said aloud: “Where are the women? They delay too long.”

Then a second knock came to the door, and a voice called as before, “Open! Open!”

The mistress felt obliged to rise and open to the call, and immediately a second witch entered, having two horns on her forehead, and in her hand a wheel for spinning wool.

“Give me a place,” she said; “I am the Witch of the two Horns,” and she began to spin as quick as lightning.

And so the knocks went on, and the call was heard, and the witches entered, until at last twelve women sat round the fire the first with one horn, the last with twelve horns.

And they carded the thread, and turned their spinning-wheels, and wound and wove, all singing together an ancient rhyme, but no word did they speak to the mistress of the house. Strange to hear, and frightful to look upon, were these twelve women, with their horns and their wheels; and the mistress felt near to death, and she tried to rise that she might call for help, but she could not move, nor could she utter a word or a cry, for the spell of the witches was upon her.

Then one of them called to her in Irish, and said, “Rise, woman, and make us a cake.”

Then the mistress searched for a vessel to bring water from the well that she might mix the meal and make the cake, but she could find none.

And they said to her, “Take a sieve and bring water in it.”

And she took the sieve and went to the well but the water poured from it, and she could fetch none for the cake, and she sat down by the well and wept.

Then a voice came by her and said, “Take yellow clay and moss, and bind them together, and plaster the sieve so that it will hold.”

This she did, and the sieve held the water for the cake and the voice said again:

“Return, and when thou comest to the north angle of the house, cry aloud three times and say, ‘The Mountain of the Fenian women and the sky over it is all on fire.’”

And she did so.

When the witches inside heard the call, a great and terrible cry broke from their lips, and they rushed forth with wild lamentations and shrieks and fled away to Slievenamon, where was their chief abode. But the Spirit of the Well bade the mistress of the house enter and prepare her home against the enchantments of the witches if they returned again.

And first, to break their spells, she sprinkled the water in which she had washed her child’s feet, the feet-water, outside the door on the threshold secondly, she took the cake which in her absence the witches had made of meal mixed with the blood drawn from the sleeping family, and she broke the cake in bits, and placed a bit in the mouth of each sleeper, and they were restored and she took the cloth they had woven, and placed it half in and half out of the chest with the padlock and lastly, she secured the door with a great crossbeam fastened in the jambs, so that the witches could not enter, and having done these things she waited.

Not long were the witches in coming back, and they raged and called for vengeance.

“I cannot,” said the feet-water; “I am scattered on the ground, and my path is down to the Lough.”

“Open, open, wood and trees and beam!” they cried to the door.

“I cannot,” said the door, “for the beam is fixed in the jambs and I have no power to move.”

“Open, open, cake that we have made and mingled with blood!” they cried again.

“I cannot,” said the cake, “for I am broken and bruised, and my blood is on the lips of the sleeping children.”

Then the witches rushed through the air with great cries, and fled back to Slievenamon, uttering strange curses on the Spirit of the Well, who had wished their ruin but the woman and the house were left in peace, and a mantle dropped by one of the witches in her flight was kept hung up by the mistress in memory of that night, and this mantle was kept by the same family from generation to generation for five hundred years after.