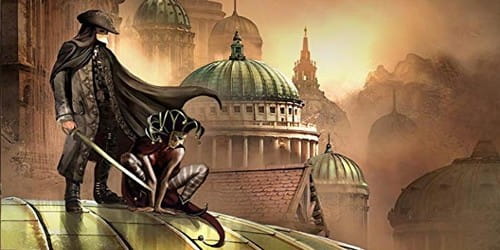 The Imaginary Thief (Inspired by an Old Chinese Anecdote)

Long ago, in a place not very different from the place where you live, people were preparing for their autumn feast. Everyone in the neighborhood was filled with the harvest spirit, baking pies, chopping wood and settling in for winter.

Dakota, the smallest child in the neighborhood, made up for his size with energy and imagination. Everyone loved little Dakota. One day he walked outside and smiled at the world around him. He felt the joy of the season down to his fingertips and toes.

By afternoon Dakota was practically shaking with excitement, for he had come up with a plan. He had no messages to bring, no chores to do, but Dakota wanted an adventure. He would travel through the village, stopping at each house and farm just to say hello. Besides, he longed to know what Mrs. Andersen was baking in her blue kitchen, what Mr. McDermott was building in his shed. He hoped to catch a glimpse of Jillian’s flower garden and to sniff the scent of Dan’s woodpile. Oh, he would find wonders everywhere. He always did.

Along the quiet road, he walked. He stopped for a moment to pet Harriet’s dog Nell, who nuzzled his hand. On he went until he came to a grove of maples. There he knelt down and scattered a handful of nuts he had carried from home for the squirrels. They wriggled their noses in thanks. The geese overhead honked greetings to the child. The wind caressed Dakota’s cheeks as he skipped along the road.

He couldn’t stop. He darted past the cornfields, waving at the cornstalks, which waved back at him. He skipped on, singing softly to himself the songs his mother sang to him each night. People looked out from their houses and waved. Jillian handed him a bouquet of flowers. Mrs. Andersen called her children to the window, and, their faces smeared with jam, they waved hello to Dakota.

“There’s that little Dakota. He’s a fine child,” Dan said to Mr. Brown, the woodcutter, and they stopped their work just long enough to wave hello. Mr. McDermott peered out of his shed to greet the child.

Dakota skipped and pranced until at last darkness cloaked the neighborhood. He sped back home and fell asleep, dreaming of corn maidens and crisp white laundry waving over Mrs. Mott’s lawn, and heard in his dream Mr. Salem’s hardworking tractor humming as it plowed the wheat fields.

The next morning at dawn, Mr. Brown rapped on Dakota’s door. When his mother opened it, Mr. Brown said angrily, “That boy’s a thief!” He pointed a long, bony finger at poor Dakota, who had just climbed out of his dream-filled bed. “My ax is missing, and we all saw you. You were walking through the neighborhood. You took my ax. You’re a thief!”

By the end of the morning, everyone had heard the news. “Mr. Brown’s ax is missing, and Dakota was out there,” cried Mrs. Andersen. “Besides, just look at him. He looks like a thief!”

“He does, you know,” Jillian whispered. “Yes, he does indeed,” Dan agreed. “That thief petted my dog,” cried Harriet indignantly.

Suddenly the neighborhood no longer loved Dakota. Everywhere Dakota went, he heard whispers. “Thief, thief, thief! You can see it, can’t you? You can see it in his eyes.”

Mrs. Mott stood guard by her laundry. Dan covered his woodpile with a tarp. Jillian cut the last of her blooming flowers and brought them inside. Mr. McDermott put a big lock on his shed.

“I’m not a thief,” Dakota pleaded. But no matter how he argued, the world around him had changed.

And then one day as Mr. Brown walked into the woods, Nell came bounding through the trees. She barked three times and pawed through a pile of damp leaves. The squirrels gathered around, standing on their hind legs, looking up at Mr. Brown. The geese stopped their flight and honked as loudly as they could.

“What’s this?” Mr. Brown said. He listened to the honks and barks. “What’s wrong?” he asked again, and suddenly he saw, beneath a pile of golden leaves, a gleam of metal. He reached down and found his ax.

He ran back to the village, the animals on his heels.

“I found my ax!” Mr. Brown called, waving it overhead. “Dakota’s no thief. Why look at that boy. Anyone can see he’s just a little boy full of curiosity.”

Now everyone looked at Dakota and, sure enough, they saw that the boy looked just as good and curious as every other child in the village.

That night the neighborhood celebrated with a feast. Dakota sat outside, inhaling the scent of sweets and roasting meat and wood smoke. Nell sat beside the child and rested her chin on his knee. The squirrels chattered in the trees. Up in the sky, the moon winked as the geese traveled past, waving their wings.

“So much depends upon imagination,” Dakota said, and all the animals agreed.