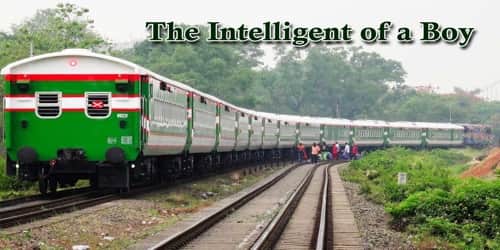 The Intelligent of a Boy

Aminul was a school-going boy. One day he was returning home from school. He was crossing the rail line. He found one of the slippers of the rail line missing. Then he thought he would go and inform the authority of the nearest railway station. He was about to go when he heard a whistle. A Passenger train was corning. Aminul was at a loss. He could not think of what to do. Then he remembered that he ought to show a red signal to stop the train. But he didn’t have anything red. He was very much worried. He was at a loss of what to do. He was thinking deeply.

Suddenly he remembered that he wore a redshirt. He pulls off his shirt hurriedly and started to wave it raising his hand standing on the rail line. After a while, the driver of the train saw the red signal and slowly stopped the train. Aminul heaved a sigh of relief. The driver became very angry. He got down from the train angrily and came to Aminul to know the matter. Some passengers also came to him. Everybody was furious to ask him the real incident. Then he told them everything and showed that one of the slippers was missing. Now the driver understood the matter expressed gratitude to Aminul. He along with the passengers thanked Aminul again and again for saving their lives. The authority was informed of the matter. The reporter’s of the local newspapers came and interviewed him. The authority took initiative and repaired the line.

After two hours, the line was repaired and the train managed to move again. The next morning, all the local newspapers published the news of the intelligence of Aminul. They praised him a lot. The Railway Authority rewarded Aminul. Thus Aminul became popular by saving the lives of hundreds of people. Actually, he was a boy of good qualities that made him great and extra-ordinary.