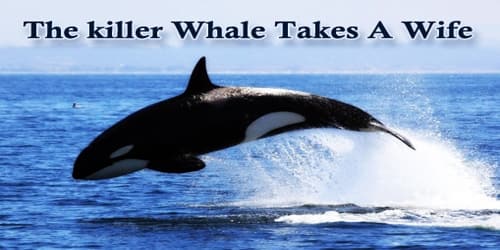 The killer Whale Takes A Wife

A man had four daughters. The eldest was 18. Every day the girls walked on the beach to a sandy point where they liked to sit and look at the sea.

One day some killer whales went by while the girls were sitting on the point. The eldest girl said, “I am going to talk to those whales.”

“No, you had better not,” advised a younger sister.

But the girl did not listen to her sister. She called to the whales, “Killer Whale, come on in. We want a ride.”

The next thing they knew, a killer whale was right up on the beach.

“Do you think you know how to use this canoe?” he asked.

“Come on in then,” said the whale and opened his big mouth. The girl went through his mouth and into his body. He showed her the interior of his tale and fins and how to use them. He took her for a ride in the water.

“This is fun,” cried the girl as they skimmed across the waves and down through the deep water.

When they came back to shore, the whale said, “How about your sisters? Would they like a ride?”

“It’s lots of fun,” the oldest girl called to her sisters. “Why don’t you try it?”

The second sister was not interested. The third sister would not try it either, but the youngest said, “I’m going to try it.”

She went through the whale’s mouth and into his interior but could not move his parts properly. Killer Whale said to her, “Go and tell your older sister to come and try it again.”

So the eldest girl went inside the killer whale. They swam away and did not return. The three younger girls waited a long time, then went home and told their mother what had happened. “How are we going to get her back?” the mother wondered.

When the father heard what had happened, he took his canoe and searched out on the water. He looked for many days for his daughter but could not find her.

One day, after he had given up the search, one of his younger daughters was walking on the beach. Her lost sister swam up to her and said, “Go and tell my parents I am married now to the killer whale.” She was never seen again.