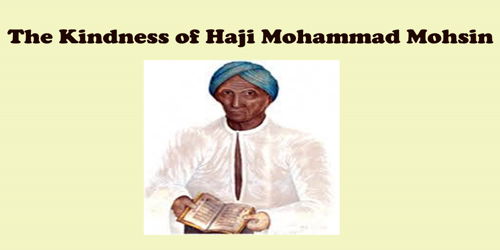 The Kindness of Haji Mohammad Mohsin

One night Haji Mohammad Mohsin was saying his prayer in his dark room. It was midnight. Pin drop silence prevailed in the room. Mohsin was deeply engaged in his prayer. Suddenly a squeaking sound disturbed him greatly.

At that time a thief broke into his room. He instantly caught hold of the thief. The thief became nervous and began trembling with fear. He thought to himself that Mohsin would beat him to death or hand over him to the police. He fell at the feet of Mohsin, begged him for mercy. Mohsin did not beat the thief. He patiently asked him (thief) why he resorted to stealing. The thief replied that poverty compelled him to do so. He added that he could hardly manage any food for his children for days together.

Mohsin sympathized with the thief, gave him some money and advised him to start a shop so that he could earn honestly and maintain his family. He took the money and started a shop from that day; the thief gave up stealing and started an honest life.