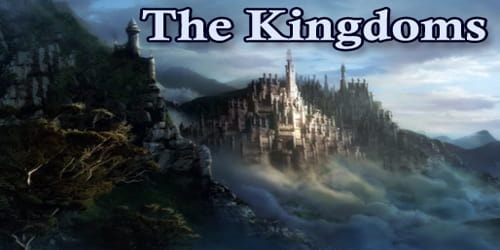 There was once a King of Prussia whose name was Frederick William.

On a fine morning in June he went out alone to walk in the green woods. He was tired of the noise of the city, and he was glad to get away from it.

So, as he walked among the trees, he often stopped to listen to the singing birds, or to look at the wildflowers that grew on every side. Now and then he stooped to pluck a violet, or a primrose, or a yellow buttercup. Soon his hands were full of pretty blossoms.

After a while, he came to a little meadow in the midst of the wood. Some children were playing there. They were running here and there and gathering the cow-slips that were blooming among the grass.

It made the king glad to see the happy children, and hear their merry voices. He stood still for some time and watched them as they played.

Then he called them around him, and all sat down together in the pleasant shade. The children did not know who the strange gentleman was, but they liked his kind face and gentle manners.

“Now, my little folks,” said the king, “I want to ask you some questions, and the child who gives the best answer shall have a prize.”

Then he held up an orange so that all the children could see.

“You know that we all live in the kingdom of Prussia,” he said; “but tell me, to what kingdom does this orange belong?”

The children were puzzled. They looked at one another and sat very still for a little while. Then a brave, bright boy spoke up and said,–

“It belongs to the vegetable kingdom, sir.”

“It is the fruit of a plant, and all plants belong to that kingdom,” said the boy.

The king was pleased. “You are quite right,” he said; “and you shall have the orange for your prize.”

He tossed it gayly to the boy. “Catch it if you can!” he said.

Then he took a yellow gold piece from his pocket and held it up so that it glittered in the sunlight.

“Now to what kingdom does this belong?” he asked.

Another bright boy answered quickly, “To the mineral kingdom, sir! All metals belong to that kingdom.”

“That is a good answer,” said the king. “The gold piece is your prize.”

The children were delighted. With eager faces, they waited to hear what the stranger would say next.

“I will ask you only one more question,” said the king, “and it is an easy one.” Then he stood up, and said, “Tell me, my little folks, to what kingdom do I belong?”

The bright boys were puzzled now. Some thought of saying, “To the kingdom of Prussia.” Some wanted to say, “To the animal kingdom.” But they were a little afraid, and all kept still.

At last a tiny blue-eyed child looked up into the king’s smiling face and said in her simple way,–

“I think of the kingdom of heaven.”

King Frederick William stooped down and lifted the little maiden in his arms. Tears were in his eyes as he kissed her, and said, “So be it, my child! So be it.”