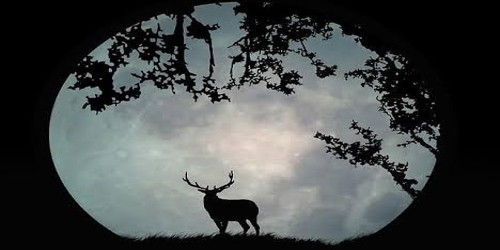 The Laughter of the Deer

The Laughter of the Deer (A Native North American Tale)

Long ago, when the world was new, the wolves often gathered in a circle in the forest and howled to the sky. In a clearing near a river, they sang and told stories to one another.

“I’ve traveled the whole world,” one of the wolves said to her companion one wintry day, and she howled so sweetly, all the other wolves stopped to listen to her adventures.

Her companion lifted his nose to the sky and harrumphed. “You may have traveled everywhere, but I’ve seen more,” he growled, and before long each wolf was boasting of adventures and courage and strength.

“I climbed the highest mountain in the world,” one young wolf bragged, and another answered, “I have journeyed 40 days without food.”

“Oh, the cold I have endured,” another howled. “I have lived on ice and wind.”

By day’s end, each of the wolves had told a tale. They sang about their troubles finding food for their small pups, and when those pups heard their names, they joined in the wolf song. The pups stood together howling until their voices filled the whole valley with sound.

For miles around, the people lighted their lamps in their homes and stared into the darkness, trying to figure out whose songs filled the night. The wolves’ silhouettes stood against the light of the moon, and the valley echoed with their sounds.

As the howling grew louder, some of the other creatures grew afraid. Rabbits began to burrow underground, and mice scurried across the icy earth, searching out places to hide. The fish in the icy river flattened their bodies at the bottom of the river, and the chattering birds grew silent.

The moon glowed, for she loved the sound of the wolves’ chorus. She floated along the top of the pine trees, smiling down upon her brood. When the wolves threw back their heads to howl, their fangs shone in the moon’s white light.

Before long the wind carried the voices of the wolves to the ears of the gentle deer, who stopped in their tracks on the far side of the river.

“What is that sound?” they asked each other.

Quivering with curiosity, they ran toward the river.

“Who can be singing?” they asked as they ran. “Whose voices fill the air?”

They ran to the edge of the river, across from the gathering of wolves. There they stood together, telling their own stories.

“What strange voices those are,” one deer said. “I have heard the birds singing and the squirrels scampering. I have heard the chipmunks chattering and the whirr of insect wings, but I have never heard voices like these, though I have traveled far and wide.”

They nodded to each other, sharing stories of the eagle’s flight, of the beaver’s building and of the salmon’s wild river run.

At last one of the deer whispered, “Shhh. Listen. They are telling their tales.”

“I have crossed the widest river in the world,” one of the wolves bragged.

“I have carried 30 pups upon my back,” another cried.

The deer began to smile, for the wolves’ stories seemed farfetched to them. “I don’t believe them,” one of the deer whispered to another, and before long the deer began to laugh out loud. “Beyond belief!” they laughed. “These wolves are wild story-tellers, yes, they are!”

The deer laughed and laughed, unable to catch their breaths they laughed so long and hard.

When the wolves heard the laughter, they stopped their howling. “Who is laughing at us?” they asked. They bared their fangs. “Who dares to laugh at us?”

And then they looked across the river and saw the deer, their laughter echoing across the land.

“Look,” the wolves growled. “Look at those creatures. The deer have no fangs. They cannot defend themselves.”

And then the wolves knew that though the deer were larger than the squirrels and the rabbits, they would be helpless against the mighty wolves and their fangs.

In one large pack, the wolves surged across the river, chasing the laughing deer. “This will teach them to laugh at us,” the wolves snarled as they charged.

And ever since the day the deer laughed at the wolves, they have been running from the angry pack, and those who are wise in the ways of the world do not laugh at the tales of the wolves.