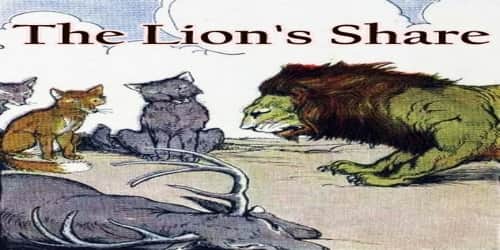 A long time ago, the Lion, the Fox, the Jackal, and the Wolf agreed to go hunting together, sharing with each other whatever they found.

One day the Wolf ran down a Stag and immediately called his comrades to divide the spoil.

Without being asked, the Lion placed himself at the head of the feast to do the carving, and, with a great show of fairness, began to count the guests.

“One,” he said, counting on his claws, “that is me the Lion. Two, that’s the Wolf, three is the Jackal, and the Fox makes four.”

He then very carefully divided the Stag into four equal parts.

He now began to glare at the others very savagely. “If any of you have any claim to the part that is left,” he growled, stretching his claws meaning, “now is the time to speak up.”