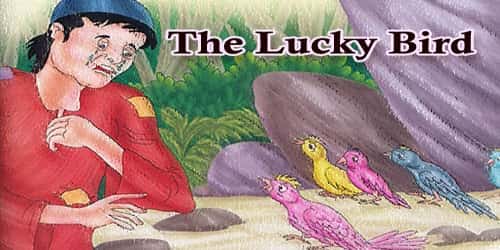 There once was a poor Woodcutter. One day while working, he felt tired and sat down under a tree to rest for a while. A little bird flying about happened to see the woodcutter and felt sad at his miserable condition. “I must help him,” thought the bird, and perched beside the woodcutter.

As the woodcutter dozed off, the little bird laid a golden egg near him and flew away. When the woodcutter woke up, he was surprised to see the golden egg. He quickly picked up and slipped it in his pocket. Then he bundled the logs he had chopped that day and cried them to the shopkeeper to whom he usually sold his wood. “Such a small bundle today?” asked the shopkeeper. “You bring big bundles every day; it seems you didn’t work very much today!”

The next day, he went to the same tree where he had found the golden egg and sat down, pretending to sleep. The little bird came again and perched beside him.

The woodcutter realized his mistake. “I am sorry I got greedy and harmed you,” he said, and realized the bird,

But the bird fell to the ground. “My end is near,” she moaned, “I come from the family of Lucky Birds. We bring luck to men, but we are destined to die if ever caught by humans.”

The woodcutter heard this and kept bitterly. He asked, “Is there any way I can help you?” The bird said, “When I die, pluck a feather from my wing and show it to the fire; you’ll be transported to my home. Give my feather to my family and tell them the truth.” Saying this, the Lucky Bird died.

The woodcutter did as he was told.

The Mother Bird and the Sister Birds then brought some green leaves and grass that could raise the dead and stuffed them into the Lucky Bird’s beak. In no time, the Lucky Bird opened her eyes.

The woodcutter was ecstatic to see her alive again. The Lucky Bird then spoke, “Luck appears and disappears; and so do we Lucky Birds. But we don’t stay with those who are greedy.” The woodcutter cried, “I have lost you because of my foolishness!” “Don’t be disheartened, friend!” said the Lucky Bird. “You have helped me, and so I shall return to you once again. But you will have to wait for that time.”

The woodcutter returned home with a heavy heart, but with the hope that the Lucky Bird would return someday.