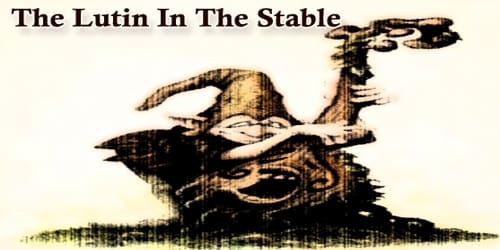 The Lutin In The Stable

Long ago, in France, there lived the lutin, a mischief-maker who appeared everywhere along the rocky shorelines, in the dark forests, in villages and towns.

The lutin could change his shape and appearance, and when he wanted to, he would take human form, and then people called him “le bon garcon,” the handsome man, though many say he was not handsome. When the lutin lived upon the coastline, he often turned into “le petit Homme rouge,” the little red man, and sometimes he had a long beard.

No matter what shape the lutin took, he loved horses. They were his cherished animals, and people always knew when the lutin was about, for his horses would appear with braided manes, and they would often become fat, for the lutin loved to feed his horses.

Now when the French people settled in Canada, they had not planned to bring along the lutin, but the lutin is a trickster, and so it was that before long, he appeared in Canada.

No one in Quebec had expected the lutin, for no one imagined he could travel across the ocean, but one morning, in early autumn, a farmer named Jacques who lived in Quebec walked out to his barn and discovered that every one of his horses had a braided mane, and a braided tail, too.

“This must be the work of the lutin,” said Jacques, “but I shall stop him from playing his tricks,” for no matter that the lutin meant no harm, he was an irritating fellow, and few farmers wanted their horses’ tails to be tangled.

Jacques thought for a while, remembering tales of other farmers who faced the tricks of the lutin. He could think of nothing that might stop the trickster, and so he went to discuss the matter with his fellow farmers.

The four farmers pondered the problem. They all wanted to help Jacques, not because they were particularly generous, but because they knew that once a lutin comes to a village or a town, he will invade every barn, stable and farm insight.

And so they came up with a solution. Together they returned to Jacques’ barn, and there, just outside the door, they dug a deep pit. “When he leaves the barn, he’ll have to come this way,” said Bernard, for this had been his idea. “The rest of you will hide inside the barn and do as I’ve instructed you to do.”

That very night Jacques, Paul, and Pierre hid inside the barn. Jacques hid in the horses’ stall, and Paul and Pierre hid just outside, in a row, so that the lutin would have to run in a straight line out the door. And there, outside the door, just beyond the pit, stood Bernard. He held a sack. This was just in case the lutin somehow managed not to fall in the hole.

They waited breathlessly, and sure enough, they suddenly heard movement, and when they saw him. The lutin was disguised, of course, as a tiny, bearded man carrying a sack full of sweetened oats to feed to Jacques’ horses.

The lutin turned to flee, for lutins do not abide by detection by human beings. He ran out of the stall, and as he did, Pierre and Paul leaped out of their hiding places.

The lutin streaked toward the barn door. The lutin can run as fast as the wind, and it is difficult to see him as he runs. The men saw only a flash of red the color of the lutin’s coat and they stared in wonder as the door to the barn flew open.

And then they heard an enormous whoop as the lutin managed to flee right over the hole, but just as they had imagined, he landed in Bernard’s huge sack. Bernard at once closed the sack.

“I’ve got him!” he cried, and the three men ran to join their friend outside.

“Don’t open the sack until dawn,” Jacques whispered as they stared at the bulging sack. “The lutin does not like sunlight.”

“Are you sure of that?” asked Pierre, for no one knew precisely what was true when it came to the lutin. They all knew, though, that they had caught the fellow, and they were so proud of themselves, they did not feel at all tired.

“We’ll stay awake all night, and in the morning we’ll have a look at our prisoner,” said Pierre. The others nodded their agreement.

They built a big bonfire, and there they sat that night, the sack held fast beside them. They sang, and toasted each other and their brilliant trick. “We’re trickier than the lutin himself,” said Paul, and the others agreed.

When dawn came, Bernard grinned happily. “I shall now open the sack,” he announced, but as he released the rope around the neck of the sack, a blur rushed past them. “What was that?” they cried in amazement, but all they heard was a giggle that turned into roaring laughter, and they knew the little trickster had run away.

He never did return to that stable, or so the tale goes, but many loggers in Quebec tell tales of their horse’s braided manes and the ways of the trickster lutin.