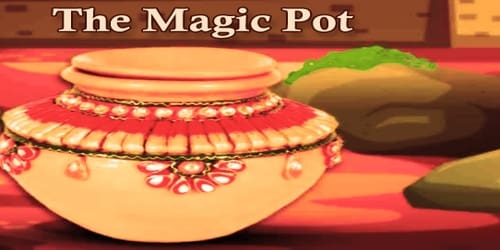 There lived a small boy not far from the market square. His name was Kalari. He liked the soup very much. He wanted to know where the old woman came from. One day when the old woman put her empty pot on her head and left the market square. Kalari followed her. But she did not see him. They went a long, long way. They climbed up a high hill. Evening came. Kalari was afraid. But he went on.

Very soon the soup was ready. Steam came out of the pot.

The smell of the soup was very good and Kalari was very hungry.

Then the old woman went back into her hut. Kalari came up to the pot. He looked under it. There was no fire there. But the pot was full of hot chicken soup!

“I must have some of it. I am so hungry!” Kalari said to himself and put his hand into the pot to take a piece of chicken. But suddenly the old woman came out of her hut. She saw Kalari with his hand in the pot.

“Yes, we see the steam of the magic pot,” they said.

From that day on the old woman stopped coming to the market with her soup. Nobody went up that high hill to see her. They were afraid of the old woman. But now, when people see clouds around the hill, they say, “Look! There is the steam from the magic pot.”