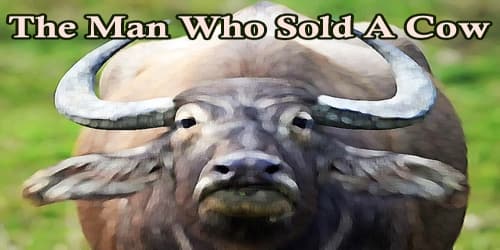 The Man Who Sold A Cow

Once upon a time, there was a farmer who longed to be wealthy. He watched his friends, and he noticed that one by one, they had succeeded, and he envied them their wealth. One day he came up with a notion.

He tied a rope around his best cow’s neck and led her to town. He stopped off at the first butcher’s shop he came to. “You see this marvelous creature,” he said, displaying his handsome, fattened cow. “I’ll make you a bargain and sell her to you at month’s end when she will be fatter still. Give me half the price now, and at month’s end you may come to retrieve her.”

The butcher agreed. The two men shook hands on the deal, and the butcher paid the down payment.

Then the farmer walked to the next butcher’s shop down the road and offered the same deal. The man, noting the cow’s fine form, agreed, and the farmer smiled and pocketed his coins.

He walked on down the road until he came to yet another butcher’s shop. There he made the same bargain again. He pocketed the money he received in advance and waved farewell to the butcher. “We’ll see you at month’s end,” he called.

“Now,” said the farmer to himself, “I’ll visit the next village,” and that’s what he did. He led his cow over the hill and through the valley and right into the next village, and there he sealed a bargain with three more butchers.

For one month the farmer was very happy. He had plenty of money, and he planned how he might do this same deal the next month.

On the last day of the month, the first butcher appeared at the door to fetch his fine cow. “Here she is,” said the farmer, and off the butcher went with the cow.

Now, the next five men appeared, one by one, and when the farmer confessed that his barn was empty and he had no cow at all, they were furious. “So you have cheated us!” they cried in unison. “Give us back our money.”

The farmer shrugged. “I cannot do that,” said the farmer. “I have spent all your money, and I’m afraid the cow is gone.”

The men shook with anger, but at last, they decided they would take the farmer to court. “A judge will make you pay for your crime,” the men said.

As the court day grew close, the farmer became more and more nervous. He tried and tried to think of some way he might settle his problem, for he had no money, and he had no cow, and he could not imagine how he would resolve his troubles. He could not go to jail, and yet he had nothing to give. He wrung his hands and fretted and worried as he thought about what he would do.

One day he was walking through the streets, wringing his hands, muttering to himself, shaking his head, more and more disturbed about his trial, which was to occur on the next day. Suddenly a man stopped him in the road, tapping him on the shoulder. “Excuse me, but you look terribly upset. Is there anything I might do for you?”

Now as it happened, this stranger was a magistrate. “Allow me; I can help you,” he said. “I have tried many hopeless cases, and I have won every single case.”

“Why that’s just what I do,” said the magistrate.

The farmer had no real choice, and so he told the magistrate his trouble.

“Nothing to fear,” the magistrate said when he had heard the tale. “Here’s what you must do. When we go to court and the judge begins to question you, you must say only ‘Baaa!’”

And so the farmer went to court, and the judge said to him, “Sir, did you or did you not sell the same cow to six different butchers?”

“What’s that?” asked the judge. “I ask you again, sir. Did you or did you not sell the same cow to six different men?”

The judge’s face grew red, and he said, “Answer me, sir. Did you sell your cow to these six men?’

“Baaa,” the farmer replied, but this time he leaned close and said it right into the judge’s face.

This made the judge furious, but no matter how often he asked, the farmer answered the same way. “Baaa,” he said. ‘Baaa baaa,” he said again.

At last the judge looked to the six butchers and shrugged his shoulders. “I cannot make this situation right,” he said. “This man is not in his right mind. We’ll have to let him go.”

“Baaa!” cried the farmer at that.

Now the court clerks grabbed the farmer’s collar and carefully led him from the courtroom. The magistrate smiled.

“I’m afraid this case is closed,” the judge said. And the six butchers went home unhappy.

A few days had passed when the magistrate happened to see the farmer walking through the village. “Hey there,” cried the magistrate, “come into my office and pay me for my services, won’t you?”

The farmer stopped and looked at the magistrate, staring straight into his eyes. And after a moment, he grinned and said, “Oh baaa,” and he turned around and walked back home.