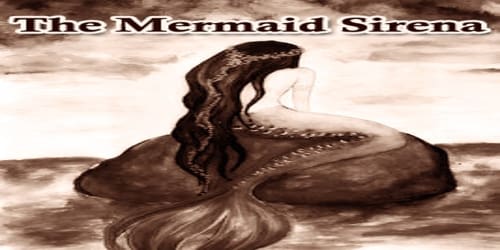 Long ago, in the city of Hagatna in Guam, there lived a family called Chamorro. The family had possessed magical powers for generations. Whatever words any member of the Chamorro family spoke came to pass. And so, as the years went by, the people of the Chamorro family grew cautious and quiet. They never responded quickly; they never spoke from anger. They always gave their words much thought, and so the family became very formal in their speech.

As time passed, the knowledge that they possessed began to dim and fade. Some never believed they possessed it at all. And so they grew less cautious, less formal. Many years passed.

In time there came to be a young girl in this family whose name was Sirena. She was a spirited girl, rebellious and fun-loving, and she loved nothing more than to swim. She sometimes swam in the river Agana, often swimming all the way to the place where the ocean met the river’s mouth. Every chance she had, she swam.

One day Sirena’s mother sent her out on an errand, and she happily agreed to go. But as she passed the river, she smiled at the porpoises she spotted. They leaped and twirled, and they seemed to be luring her to swim with them. Not stopping to think of her mother, Sirena dived into the water.

She swam and swam, and many hours passed. Sirena lost track of the time as she played with the tortoises and porpoises and the many fish at the reef, turning somersaults and swimming in wide circles.

When it was nearly evening and Sirena had not returned home, her mother grew frantic. “Where can that girl be?” she wondered. She knew Sirena loved the water, and so she worried that something terrible might have befallen her child. She ran to the beach, and there she spied a fisherman. “Sir, have you seen my daughter?” she cried, desperately.

The fisherman pointed far out to sea, and Sirena’s mother stared into the setting sun. There she spied her daughter, happily swimming and diving among the sea creatures.

Overwhelmed with relief and angry at her daughter’s disobedience, her mother did not stop to think; she did not compose herself or weigh her words. Instead, she simply ran to the edge of the shore and cried, “That girl should become a fish!”

At that very moment, the girl in the ocean felt something tug at her legs. First one, then the other turned rigid, and when Sirena tried to kick, her two legs stuck together, and no matter how she tried, she could not pull them apart. Terrified, she used her arms to swim toward shore. As she moved slowly forward, she searched the beach, hoping someone there might save her.

And then she saw her mother. She waved and called, “Help me, Mother!”

Just then Sirena’s grandmother came to the beach. “Child,” she called, and Sirena waved and waved her arms. She loved her grandmother. “Nina!” she called to her. “Help me, please. Something is wrong!”

The grandmother swung to face Sirena’s mother. “See what you have done?” she scolded. “Your words have come true. You were not careful. You know what the Chamorro magic will do.”

Sirena’s mother burst into tears, and Sirena gasped for air as her lower body, to her astonishment, continued to change. Now it turned green, and when she touched the place that once had been her legs, she felt the scales growing there.

“Nina, help me,” she cried again, and her grandmother ran to the edge of the waves, gazed intently at her beloved granddaughter and cried, “Leave a part of her that belongs to me.”

Sirena continued to swim, pulling with all her strength, for now, she understood that her lower body had become a single, powerful fin. But hearing Nina’s words, she smiled, and she felt new strength enter her upper body. Her fin was strong, but her arms were just as strong. With just one stroke, she pulled herself ahead many feet, and then she wanted to try that fin. She swept it through the water, slapped the surface, and then with a whirl, she jumped clear of the surface, higher even than her porpoise companions could jump.

Sirena’s mother and grandmother stood on the beach watching their child leap into the air. Sirena spun and flipped as she sailed across the water’s surface; she lunged deep and came up with tears in her eyes. But she was smiling, too, for she understood that she had become a mermaid. She knew her mother’s words had forever changed the way she would live. From that day on, the world of water would always be her home.

For years sailors told tales of sighting Sirena, and many tried to capture her. But anyone wishing to catch her, so legend has it, needs to use a net made of the hair of a woman who has never once cut it. Many fishermen have tried over the years, but to this day, nobody has captured the lively Sirena.