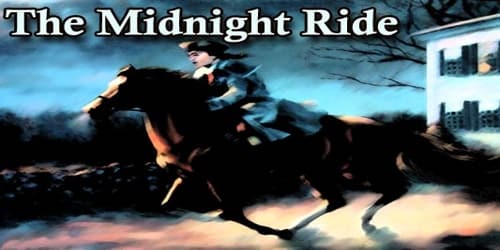 The midnight ride of Paul Revere happened a long time ago when this country was ruled by the king of England.

There were thousands of English soldiers in Boston. The king had sent them there to make the people obey his unjust laws. These soldiers guarded the streets of the town; they would not let anyone go out or come in without their leave.

The people did not like this. They said, “We have a right to be free men, but the king treats us like slaves. He makes us pay taxes and gives us nothing in return. He sends soldiers among us to take away our liberty.”

The whole country was stirred up. Brave men left their homes and hurried toward Boston.

They said, “We do not wish to fight against the king, but we are free men, and he must not send soldiers to oppress us. If the people of Boston must fight for their liberty, we will help them.” These men were not afraid of the king’s soldiers. Some of them camped in Charlestown, a village near Boston. From the hills of Charlestown, they could watch and see what the king’s soldiers were doing.

They wished to be ready to defend themselves if the soldiers should try to do them harm. For this reason, they had bought some powder and stored it at Concord, nearly twenty miles away.

When the king’s soldiers heard about this powder, they made up their minds to go out and get it for themselves.

Among the watchers at Charlestown was a brave young man named Paul Revere. He was ready to serve his country in any way that he could. One day a friend of his who lived in Boston came to see him. He came very quietly and secretly, to escape the soldiers.

“I have something to tell you,” he said. “Some of the king’s soldiers are going to Concord to get the powder that is there. They are getting ready to start this very night.”

“Indeed!” said Paul Revere. “They shall get no powder, if I can help it. I will stir up all the farmers between here and Concord, and those fellows will have a hot time of it. But you must help me.”

“I will do all that I can,” said his friend.

“Well, then,” said Paul Revere, “you must go back to Boston and watch. Watch, and as soon as the soldiers are ready to start, hang a lantern in the tower of the old North Church. If they are to cross the river, hang two. I will be here, ready. As soon as I see the light, I will mount my horse and ride out to give the alarm.”

And so it was done.

When night came, Paul Revere was at the riverside with his horse. He looked over toward Boston. He knew where the old North Church stood, but he could not see much in the darkness.

Hour after hour he stood and watched. The town seemed very still, but now and then he could hear the beating of a drum or the shouting of some soldier.

The moon rose, and by its light he could see the dim form of the church tower, far away. He heard the clock strike ten. He waited and watched.

The clock struck eleven. He was beginning to feel tired. Perhaps the soldiers had given up their plan.

He walked up and down the riverbank, leading his horse behind him; but he kept his eyes turned always toward the dim, dark spot which he knew was the old North Church.

All at once a light flashed out from the tower. “Ah! there it is!” he cried. The soldiers had started.

He spoke to his horse. He put his foot in the stirrup. He was ready to mount.

Then another light flashed clear and bright by the side of the first one. The soldiers would cross the river.

Paul Revere sprang into the saddle. Like a bird let loose, his horse leaped forward. Away they went.

Away they went through the village street and out upon the country road. “Up! Up!” shouted Paul Revere. “The soldiers are coming! Up! up! And defend yourselves!”

The cry awoke the farmers; they sprang from their beds and looked out. They could not see the speeding horse, but they heard the clatter of its hoofs far down the road, and they understood the cry, “Up! Up! And defend yourselves!”

“It is the alarm! The redcoats are coming,” they said to each other. Then they took their guns, their axes, anything they could find and hurried out.

So, through the night, Paul Revere rode toward Concord. At every farmhouse and every village he repeated his call.

The alarm quickly spread. Guns were fired. Bells were rung. The people for miles around were roused as though a fire were raging.

The king’s soldiers were surprised to find everybody awake along the road. They were angry because their plans had been discovered.

When they reached Concord, they burned the courthouse there.

At Lexington, not far from Concord, there was a sharp fight in which several men were killed. This, in history, is called the Battle of Lexington. It was the beginning of the war called the Revolutionary War. But the king’s soldiers did not find the gunpowder. They were glad enough to march back without it. All along the road, the farmers were waiting for them. It seemed as if every man in the country was after them. And they did not feel themselves safe until they were once more in Boston.