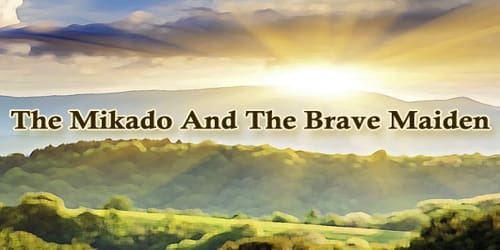 The Mikado And The Brave Maiden

Once upon a time, a prosperous merchant lived with his daughter, Myoko. He loved his child, though sometimes, despite his daughter’s devotion, he secretly wished he had a son.

“Father,” Myoko said, reading his thoughts, “I am your blessing,” and the merchant smiled, though his secret desire remained.

One day the merchant took a bolt of cloth to the ruler of the land, the Mikado, who was weak and ill and prone to fits of temper. The merchant unrolled his cloth before the Mikado, certain of offering pleasure. But to his dismay, the Mikado scowled. “Your cloth is faded,” he cried. “How dare you offend me.” And for punishment, he banished the merchant to a lonely island off the coast of Japan.

When Myoko learned the news, she was distraught, but she determined to go to him. She would not let him live his days alone. If he must be banished, she would join him.

She set off at once for the seaside. At the docks, she begged sailor after sailor to take her to the islands. “I’m seeking my father,” she said. But the sailors, one by one, refused. They were too afraid, for they knew if they disobeyed the Mikado’s laws, they would be executed.

“We cannot help you,” each sailor said. “Your father is meant to be alone.”

But Myoko was determined. That night, when all the sailors were asleep, she stole into a tiny, unmanned boat and, all alone, set sail.

At sunrise, she reached one of the large islands. She walked about, asking everyone she saw if they would tell her where she might find her father. The islanders refused, for they too feared the Mikado’s fury and his punishment.

By evening Myoko felt gloom descend upon her. With nowhere to go and no one to help her, she sought a place to sleep. Atop a cliff, she spied a statue of Buddha. She lay upon the ground to sleep beneath Buddha’s protective gaze.

She was nearly asleep when she heard the sound of weeping. She stood and peered around the statue and saw a young girl struggling with a priest who was trying to push her over the cliff.

“Stop!” cried Myoko. The priest, startled by the sound, let go of the girl and turned to face Myoko. Now Myoko saw that the priest, too, was weeping.

“Why do you cry?” Myoko asked.

“Tonight the Sea Serpent demands his maiden. Every year we must choose a maiden by a lot. If we fail to give the serpent his toll, he will create a year of storms. Our bravest sailors will drown. Our lands will flood.”

“Take me, then,” said Myoko. “I cannot find my father and have nothing to live for. Let me take the place of your young maiden.”

And before the priest could answer, Myoko dived into the sea.

Down she sank until she saw the great serpent slithering out of his cave. When he spied her, he opened his huge mouth, and Myoko saw dozens of sharp, pointed teeth and a tongue keen as an arrow. Quickly she reached for her dagger, and without a moment’s hesitation, she swam toward the serpent and stabbed his heart.

At first, he thrashed his tail, whipping the water, the coral, the fish, and chased her toward the surface, but suddenly he collapsed. Myoko, strengthened by her purpose and with Buddha’s protection, had done what no one else in all the years had had the courage to do.

Myoko dived back underwater and peered inside the cave, and there she saw a small statue of the Mikado, the man who had banished her father. Without thinking why she tied the statue to her back and swam out of the cave. Now she stopped to think. The islanders would never believe the serpent was dead unless they saw for themselves. Summoning every ounce of strength, she swam to the serpent, grabbed him by his horns and pulled him behind her. Then she began to swim toward shore.

Meanwhile, on land, the priest and the maiden were offering prayers of thanks to Buddha for Myoko’s sacrifice. They were amazed when they looked up and saw the brave maiden swimming toward shore, pulling the serpent behind her.

At first, they trembled with fear, certain the serpent was alive and chasing her, coming to destroy their land. But then they looked again and realized that Myoko was dragging the lifeless serpent.

Overcome with joy, they ran to help Myoko pull the monster onto the beach. Safe onshore, Myoko untied the statue from her back and placed it beside the serpent.

The priest bowed his head. “Many years ago,” he said, “an enemy of the Mikado cursed him and threw his statue into the sea. Ever since that day, the Mikado has been ill and cruel. No one could cure him. We must send news of Myoko’s great deed.”

Before long news spread across the land. “The Mikado is healthy again!” And the people were filled with joy. Safety and comfort had come to them from the courage of a young girl.

The Mikado sent at once for Myoko’s father. “You are free,” he said. “Your daughter has saved us all. She should be richly rewarded, but the only reward she asked was her father’s return.”

Myoko embraced her father. With tears in his eyes, he said to her, “You are indeed my blessing.”