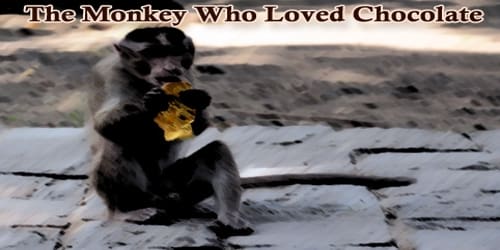 The Monkey Who Loved Chocolate

One day, Jim’s Aunty took him to the zoo. Jim’s mother had told her that Jim didn’t like chocolate, but she didn’t believe that.

“Poor little thing,” she said to herself. “His mum won’t buy him chocolate because she’s too mean. But I’ll buy him a nice lovely bar and give it to him while we are out.”

And that’s what she did. Only it was true. Jim really didn’t like chocolate.

“Oh thanks, Aunty,” he said when she gave it to him. “That’s really kind of you. I’ll just save it for later if you don’t mind.”

But he did like seeing all the animals in the zoo.

The prowling bears weren’t at all cuddly, but they were super cool all the same.

The giraffes had lovely soft noses. The snakes in the snake house-made Jim’s blood run cold, but he liked being scared really just a bit.

And the monkeys well everyone loves monkeys. They looked silly but intelligent all at the same time. And in particular, one was nicer than all the others. He came up to the bars of the cage and pressed his face through them. That little monkey was Theo. Jim thought he looked hungry, and then he remembered the bar of chocolate in his coat pocket and decided to give it to him.

Aunty Judith was starting to move on to the next cage full of chimpanzees. Jim unwrapped the chocolate bar and threw it to Theo. The chocolate bounced against the cage, but Theo reached out with his little hand through the bars and grabbed it. Instead of stuffing it down his mouth, he started to lick it. His big brown eyes started to go all dreamy. He was in monkey heaven.

Just then Aunty Judith called to Jim, and he had to run after her: “Thanks for the chocolate Aunt Judith,” he said. “It was delicious.”

“Such a mean mummy not to give Jimmy chocolate. He loves it. Obviously.”

But it was Theo who was in love with chocolate. It went straight to his stomach, and then straight to his brain, and soon he was swinging from around the climbing frame of his cage like a mad monkey.

“Ooo…oooo Ah…Ah!” he said at the top of his voice for the next hour and a half. And the keepers and all the other monkeys thought he had gone crazy. Which he had. He was crazy for chocolate.

But when the chocolate high wore off, Theo felt really down. Have you ever felt like that when you’ve eaten too much chocolate? First, it makes you really happy, and then later, you feel a bit sad. Well, that’s what happened to Theo. And all the next day he sat in his cave thinking to himself:

The keepers noticed that he had gone off his bananas, and they worried that he was pining away. One of them thought that he must be in love and that a girl monkey had turned her nose up at him. Another thought was he was sick, but the vet couldn’t catch Theo because he started to swing away.

“There’s nothing wrong with that monkey,” he said.

But nobody guessed that Theo was planning to escape so he could find some chocolate. And the very next day, his chance came. The keeper came in carrying a big bucket full of bananas, and he didn’t close the door properly behind him. Theo was watching out for something like this to happen, and in a moment he was out.

“Oi You! Stop!” shouted another keeper.

But Theo didn’t. Soon he was heading for the turn styles, which were meant to stop people coming in without paying. As Theo was jumping over them, he saw a boy in the queue eating a fruity chocolate bar he grabbed that and made his way down the street. The boy was too startled to cry. He just said:

“Mum, did you see that monkey stole my chocolate?” he said.

But his mum hadn’t seen, and she said: “Don’t tell fibs. I’m not buying you another one. You’re the greedy little monkey.”

Theo gobbled down the stolen chocolate, and now he was on a high. He headed straight for the shopping center not because he knew that chocolate was there but he sensed it.

Now the Emergency Services started to get lots of strange calls. They are the people you call when something terrible happens like a fire, or an accident, or a theft.

First of all, a little girl called and said that a monkey had stolen her chocolate. The woman who took the call told her to stop mucking around and wasting time or she would get a visit from a policeman.

But then the owner of a corner shop called and said that a monkey had rushed into his shop and rushed out again with an arm full of nutty Choco-bars.

And then a gift shop rang to say that somebody had stolen several pounds of hand-made Belgium chocolates.

And the head of the supermarket grocery store rang to say that a monkey was swinging over the shelves, knocking tins, jars, and bottles of milk all over the place, and generally creating mayhem.

“I don’t suppose you believe me,” he said sadly. “But you can hear the noise. Those are my customers. Some of them are screaming and others are laughing.”

“Oh yes, I do believe you,” said the telephonist at Emergency Services. “And I can tell you now that he’s heading straight for your chocolate shelves.”

Which of course he was.

Now the situation was becoming serious. The Police set up a special Incident Centre, which is what they do when something really, really bad happens. And Chief Inspector Clews put twenty officers on the case and told every patrol car and policeman on the beat to look out for a monkey on the loose.

The local television news had pictures of all the chaos caused by Theo and interviews with children whose chocolate he had stolen.

“This disaster could not have happened at a worse time. Easter is on its way, and shopkeepers say it is too dangerous to put out Easter Eggs. Our children may have to go without chocolate this Easter.”

First, he got a special cage with an automatic door and filled it with chocolate bars. He left it in the middle of the park because he guessed that Theo was hiding there which he was. But Theo wasn’t stupid. He saw the policemen bring the cage, and he knew that it was a trap. Instead, he climbed into the back of a supermarket lorry just as it was unloading. That time he got away with a whole cardboard box full of chocolate bars.

Then the police were armed with tranquilizer guns which fired special darts to make Theo go to sleep. But it’s hard to hit a fast-swinging chocolate-charged monkey, and they couldn’t shoot Theo.

Now every year, it was the tradition to have an Easter Egg hunt in the Mayor’s back garden which was so big; it was almost like a park. All the children from the town were invited to come and look for eggs hidden under flowers and behind trees. But this year, the Mayor said he wasn’t going to have an Easter Egg hunt because he couldn’t trust his police force to stop the monkey coming and spoiling it all. So all the children were very sad.

And so was the Easter Bunny.

The Easter Bunny decided to go and have a word with Theo. He knew where he was hiding in the park because he had often smelt chocolate around a certain hollow tree. He went there and called out:

“Hey, you. What do you think you are doing spoiling everything for the little children?”

Theo looked out and saw the bunny. He wasn’t afraid of a little fluffy bunny rabbit, and so he came out to talk to him.

He said: “What do you mean spoiling everything for the children? There’s enough chocolate in this world to go round isn’t there?”

But the Easter Bunny was very cross. And when he was cross, he looked surprisingly fierce, even though he was all fluffy and white.

“How can I go around hiding Easter Eggs when I know at any moment you might come along and steal them? Stealing is wrong, and even a monkey should know that.”

And that night Theo couldn’t sleep because his conscience kept on telling him that the bunny was right. Stealing is wrong.

So the next day he went back to the zoo and surrendered.

A week went by and he was still sad. And eventually, Sunday came. And it was a very special Sunday because it was Easter Sunday.

And the Easter Bunny bought chocolate to all the children.

And do you know what?

He also bought a special supply of Easter Eggs to Theo. And he bought eggs to Theo every Easter after that so that all year long he had something to look forward to. And even Theo realized that you can’t eat chocolate all the time because you’ll get fat, and then you won’t be able to swing from tree to tree and go “ooo oooo Aaah Aaah.” So it’s much better to keep it for a special treat. Unless, of course, you don’t like chocolate.

And that’s the story of the Monkey Who Loved Chocolate.