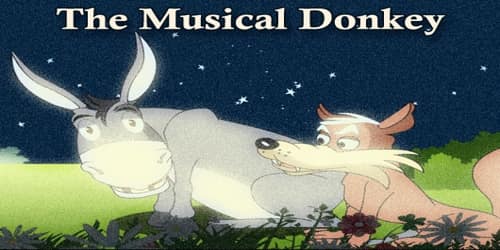 Once upon a time, there lived a washerman who had a thin donkey. His donkey used to carry loads of clothes to the river bank every day. The donkey was not satisfied with the food that the washerman gave to him, so he wandered in the fields nearby and ate the crops.

One night, the donkey met a jackal and became his friend. Both of them went out in a field and found cucumbers. They ate them to full their stomachs. They were happy and decided to come daily to full up their stomachs.

Once, after a tasty meal of cucumbers, the donkey thought to sing a song. The jackal warned the donkey not to sing. The donkey did not listen to the jackal and started singing. The jackal immediately jumped over the fence and went away. On hearing a donkey braying in the field, the guard woke up and rushed out to beat the donkey. The donkey ran to save his life. The donkey realized his mistake and felt sorry for not listening to the good advice of the jackal.

Moral of the story: ‘Think before you act.’