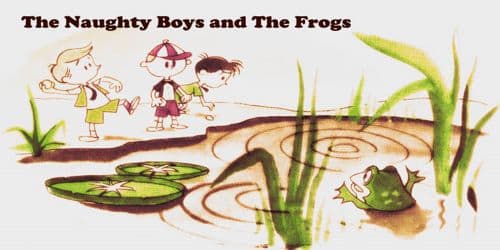 The Naughty Boys and The Frogs

In a village, there was a pond. The water in the pond was very dirty. There lived many frogs in the water. They used to play together in the water all day long. One day some boys were passing by the pond. They saw the frogs, crabs, and snails playing in the pond. Seeing this, they began to throw stones at the frogs and made a funny. Some frogs were seriously hurt and some were even dying. It delighted the boys. They were throwing some more stones at them. The frogs became very much puzzled and did not know what to do. They became anxious too for their lives.

The oldest frog called the boys and said, “Dear little boys, why are you throwing stones at us? We don’t do any harm to you. Why do you become so cruel to us? Some of us have already died. Many of us have been hurt”. The boys said, ‘We are just playing. We don’t hurt you. We are only throwing stones”. The old frog said to the boys, “Please stop your cruel play. Because what’s play to you is death to us”. The boys now felt very sorry for their misdeed. So they stopped their cruel task and went home with a heavy heart.

Moral of the story: ‘What is the play to one is death to another.’