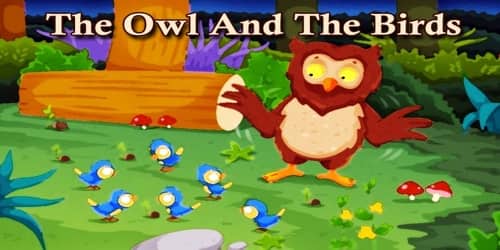 The Owl And The Birds

The Owl is a very wise bird; and once, long ago, when the first oak sprouted in the forest, she called all the other Birds together and said to them, “You see this tiny tree? If you take my advice, you will destroy it now when it is small: for when it grows big, the mistletoe will appear upon it, from which birdlime will be prepared for your destruction.”

Again, when the first flax was sown, she said to them, “Go and eat up that seed, for it is the seed of the flax, out of which men will one day make nets to catch you.”

Once more, when she saw the first archer, she warned the Birds that he was their deadly enemy, who would wing his arrows with their own feathers and shoot them.

But they took no notice of what she said: in fact, they thought she was rather mad, and laughed at her. When, however, everything turned out as she had foretold, they changed their minds and conceived a great respect for her wisdom. Hence, whenever she appears, the Birds attend upon her in the hope of hearing something that may be for their good.

She, however, gives them advice no longer but sits moping and pondering on the folly of her kind.

Moral of the story: ‘Do not let your vanity make you overestimate your powers.’