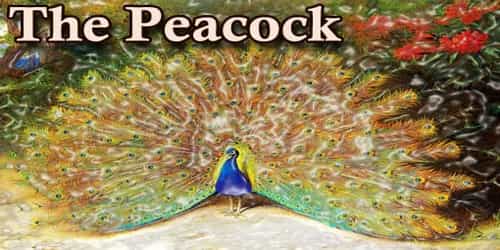 The Peacock, they say, did not at first have the beautiful feathers in which he now takes so much pride. These, Juno, whose favorite he was, granted to him one day when he begged her for a train of feathers to distinguish him from the other birds. Then, decked in his finery, gleaming with emerald, gold, purple, and azure, he strutted proudly among the birds. All regarded him with envy. Even the most beautiful pheasant could see that his beauty was surpassed.

Presently the Peacock saw an Eagle soaring high up in the blue sky and felt a desire to fly, as he had been accustomed to do. Lifting his wings he tried to rise from the ground. But the weight of his magnificent train held him down.

Instead of flying up to greet the first rays of the morning sun or to bathe in the rosy light among the floating clouds at sunset, he would have to walk the ground more encumbered and oppressed than any common barnyard fowl.

Moral of the story: ‘Do not sacrifice your freedom for the sake of pomp and show.’