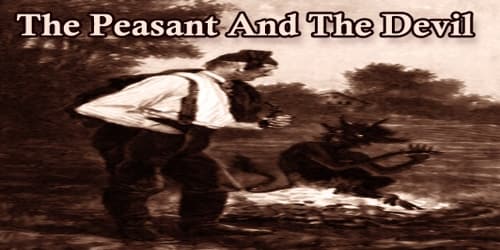 The Peasant And The Devil

There was once on a time a far-sighted, crafty peasant whose tricks were much talked about. The best story is, however, how he once got hold of the Devil and made a fool of him. The peasant had one day been working in his field, and as twilight had set in, was making ready for the journey home, when he saw a heap of burning coals in the middle of his field, and when, full of astonishment, he went up to it, a little black devil was sitting on the live coals. “Thou dost indeed sit upon a treasure!” said the peasant. “Yes, in truth,” replied the Devil, “on a treasure which contains more gold and silver than thou hast ever seen in thy life!” “The treasure lies in my field and belongs to me,” said the peasant. “It is thin,” answered the Devil, “if thou wilt for two years give me the half of everything thy field produces. The money I have enough of, but I have a desire for the fruits of the earth.”

The peasant agreed to the bargain. “In order, however, that no dispute may arise about the division,” said he, “everything that is above ground shall belong to thee, and what is under the earth to me.” The Devil was quite satisfied with that, but the cunning peasant had sown turnips.

Now when the time for harvest came, the Devil appeared and wanted to take away his crop; but he found nothing but the yellow withered leaves, while the peasant, full of delight, was digging up his turnips. “Thou hast had the best of it for once,” said the Devil, “but the next time that won’t do. What grows above ground shall be thin, and what is under it, mine.” “I am willing,” replied the peasant; but when the time came to sow, he did not again sow turnips, but wheat.

The grain became ripe, and the peasant went into the field and cut the full stalks down to the ground. When the Devil came, he found nothing but the stubble and went away in a fury down into a cleft in the rocks. “That is the way to cheat the Devil,” said the peasant, and went and fetched away the treasure.