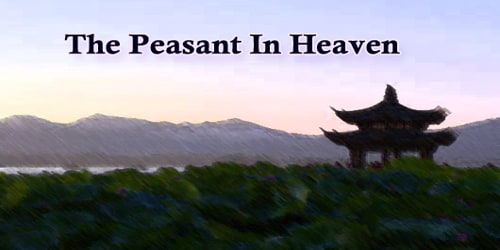 The Peasant In Heaven

Once on a time a poor pious peasant died and arrived before the gate of heaven. At the same time a very rich, rich lord came there who also wanted to get into heaven. Then Saint Peter came with the key, and opened the door, and let the great man in, but apparently did not see the peasant, and shut the door again. And now the peasant outside, heard how the great man was received in heaven with all kinds of rejoicing, and how they were making music, and singing within.

At length, all became quiet again, and Saint Peter came and opened the gate of heaven, and let the peasant in. The peasant, however, expected that they would make music and sing when he went in also, but all remained quite quiet; he was received with great affection, it is true, and the angels came to meet him, but no one sang.

Then the peasant asked Saint Peter how it was that they did not sing for him as they had done when the rich man went in and said that it seemed to him that there in heaven things were done with just as much partiality as on earth. Then said Saint Peter, “By no means, thou art just as dear to us as anyone else, and wilt enjoy every heavenly delight that the rich man enjoys, but poor fellows like thee come to heaven every day, but a rich man like this does not come more than once in a hundred years!”