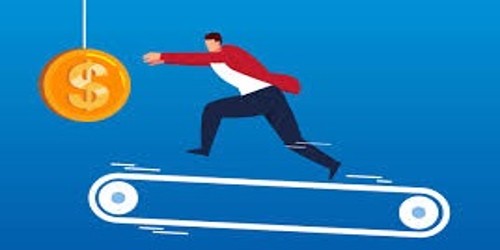 The Price of Greed

The Price of Greed

Greed is a driving force of the world’s wellbeing; all attempts to eliminate greed from humanity have ended up as disasters. Here I’m telling a story upon the above topic.

Paul looked at the board. The price of the shares he bought yesterday had risen by 46 cents. Wow! He took out his calculator. He had bought 3,000 shares. Multiply that by $0.46 would net him a profit of $1,380. Wow again! He had made that amount in just one day.

The share market had been bullish for several weeks now and many people like Paul were getting a piece of the action. Rumors were rife that shares would keep rising indefinitely. It was the chance of a lifetime to make some serious money. In order to buy more shares, Paul took out a loan of $200,000 from a bank using his retail business as collateral.

For the whole of the following week, Paul joined hundreds of speculators in the stock exchange, buying up shares that kept rising. Paul’s wife warned him about the consequences of a fall in the share prices, but Paul was confident that he could make his bundle and get out before the prices dropped.

Prices kept rising. Paul estimated his profits to be in the region of $300,000 already. if the trend continued, he would have half a million in two weeks and a million in a month. He was confident that he would be a millionaire in a month’s time.

Two weeks later, indeed Paul’s total shares were worth more than half a million dollars, and the share prices were still rising. His wife advised him to sell and take the profit, but he refused. Just two more weeks and he would be a millionaire, two more weeks !

The drop cam every suddenly one day. At first Paul thought it was just a temporary fluctuation in the share prices. He held firm, confident that the prices will rebound upwards. it did the following day and Paul regained confidence. Then the prices fell again, and again. In three days, he had lost all his profits plus part of his capital. If he sold then, he would have made a dreadful loss. No, he would hold on. the prices would rise again.

One month later, Paul had lost almost everything. Share prices had reached an all-time low. There was despair all around.

In his greed for riches, Paul lost all his savings and now owed the bank to the tune of $200,000. Fortunately, he had his retail business to fall back on. He would have to work extra hard to pay off the bank.

Some speculators were not so lucky. They were reduced to bankruptcy. Such is the price of greed.