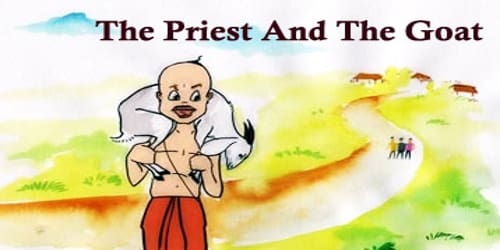 The Priest And The Goat

Once, there lived a pious Priest in a small village. He was a very innocent and simple-minded person, used to perform religious rituals. On one occasion, he was rewarded with the goat for his services by a wealthy man. The Priest was happy to get a goat as the reward. He happily slung the goat over his shoulder and began the journey towards his home. On the way, three cheats (Thugs) saw the Priest taking the goat.

All of them were lazy and wanted to cheat the Priest so that they could take away the goat.  They said, “This goat will make a delicious meal for all of us. Let’s somehow get it”. They discussed the matter amongst themselves and devised a plan to get the goat by fooling the Priest. After deciding the plan, they got separated from one another and took different hiding positions at three different places on the way of the Priest.

As soon as, the Priest arrived at a lonely place, one of the cheats came out of his hiding place and asked Priest in a shocking manner, “Sir, what are you doing? I don’t understand why a pious man like you needs to carry a dog on his shoulders?” The Priest was surprised to hear such words.

He screamed, “Can’t you see? It’s not a dog but a goat, you stupid fool”. The cheat replied, “Sir, I beg your pardon. I told you what I saw. I am sorry if you don’t believe it”. The Priest was annoyed at the discrepancy but started his journey once again.

The Priest had barely walked a distance, when another cheat came out of his hiding place and asked the Priest, “Sir, why do you carry a dead calf on your shoulders? You seem to be a wise person. Such an act is pure stupidity on your part”. The Priest yelled, “What? How can you mistake a living goat for a dead calf?” The second cheat replied, “Sir, you seem to be highly mistaken in this regard. Either you don’t know how does goat look like or you are doing it knowingly. I just told you what I saw. Thank you”. The second cheat went away smiling. The Priest got confused but continued to walk further.

Again the Priest had covered a little distance when the third cheat met him. The third cheat asked laughingly, “Sir, why do you carry a donkey on your shoulders? It makes you a laughing stock”. Hearing the words of the third thug, the Priest became really worried. He started thinking, “Is it really not a goat? Is it some kind of a ghost?”

He thought that the animal he was carrying on his shoulders might really be some sort of ghost, because it transformed itself from the goat into a dog, from a dog into a dead calf and from the dead calf into a donkey. The Priest got frightened to such an extent that he hurled the goat on the roadside and ran away. The three tricksters laughed at the gullible Priest. They caught the goat and were happy to feast on it.

Moral of the story: ‘One should not be carried away by what others say. Don’t be fooled by those who want to take advantage of you.’