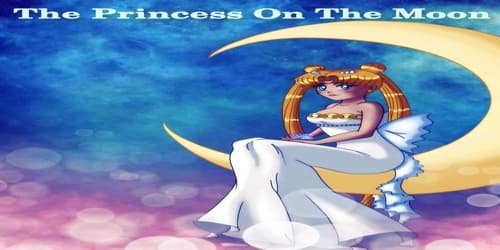 The Princess On The Moon

Long ago a princess named Sabrina lived with her grandfather in a palace by the sea. The grandfather hoped Sabrina would marry. He had begun to fret because his granddaughter shunned all her suitors. “He’s too shy,” she would say, or too selfish, too silly, too sweet or too sour. He feared that when he died, his granddaughter would be all alone.

“Tell me, Sabrina,” her grandfather asked, “who will you ever marry?”

“I don’t love anyone,” she answered him. “I must meet someone worthy of love.”

“My dear child,” said her grandfather, “no one is perfect,” but he was secretly proud of his granddaughter for her confidence and beauty.

“I will find someone perfect,” Sabrina said, “or I will never marry.” And just as she said that she stared up at the moon. “Grandfather, look!” she cried, for there was a tiny little man dressed in yellow racing along the crescent’s rim. “See that man running up there?”

Sabrina’s grandfather looked but saw nothing. “Your eyes are playing tricks on you.”

Her grandfather patted her head. “Stop such foolish talk, child,” he said.

“But look, grandfather, look!” And this time when the old man looked, he saw, to his amazement, a little man moving on his tiny legs through the sky. He jumped from the moon and raced toward them, and a moment later he was at their side.

“I am the messenger from the moon,” the little man said. He bowed to them. “I bring a message from Prince Moon. He wishes to meet the princess.”

The princess’s grandfather scowled. “I’ve never heard of such a man,” he grumbled, “and my granddaughter will meet no one until I have met him.”

“Well, then,” said the little man, “let us go at once,” and with that, he took the grandfather’s finger with his little hand and tugged. Before the grandfather could say another word, he was rising off the terrace, flying into the glittering sky, speeding across the yellow path of the moon.

Distraught, the princess stared after them. She could see the moon, but after a few moments, she no longer could see her grandfather or the little man, and she wept to think she might have lost her beloved guardian.

She stared for what seemed many hours, and then, suddenly, the old man and the little messenger were at her side again. She laughed with relief at the sight. And she laughed still more when she heard her grandfather’s words.

“Prince Moon wishes to marry you, my dear, and you must go to the moon to meet him.”

“I will!” the princess said, for Sabrina was brave, too. The little man took her hand, and just as her grandfather had, she rose into the sky.

Late that night, the princess returned. She stood before her grandfather, her face aglow. “I am in love,” she said. “I am in love with Prince Moon, Grandfather. He is good and kind, generous and loving, warm and wise. He is the only one I will love.” Her smile was bright with hope and joy.

The old man breathed deeply. “That is good,” he said, “and now that this is settled, I shall be able to rest and know that you will always be well-loved.”

“There is one problem, Grandfather,” the princess said. “Prince Moon cannot leave the moon. We must go there to live with him.”

“Leave my palace?” the grandfather cried. “No, no, I must not leave my home after all these years, my dear girl.” He put his arms around his granddaughter and held her and turned to the little man. “You will not have her. She will stay on Earth! I cannot be alone.”

“There is away,” the little man said softly. His voice was as small as his body, but it held joy. “The princess will go to the moon and marry Prince Moon, and you, sir, can stay in your beautiful palace. I will stay here with you in her place, and once each month I will fly you to the moon to visit your beloved granddaughter.”

By now the old man was too tired to argue. And when he looked at his granddaughter’s face, he saw that this was her wish, and he knew that he must not stop her from following her dreams. When he looked more closely still, he saw that her face had changed. Half moonlike in its beauty now, he knew she was already dreaming of her prince.

The grandfather waved farewell to his granddaughter, and though he wept to see her leave, he also felt joy. When the whole country learned of the news, everyone rejoiced, for the union of the Earth and moon, they knew, would last forever.