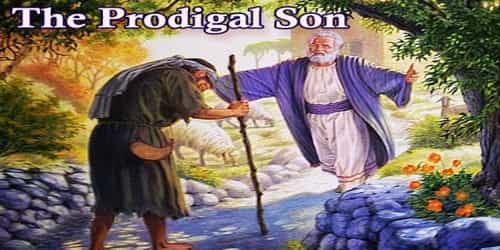 Once upon a time there lived a man, who had two sons and he dearly loved them both. The sons helped their father to manage his estate, for he was a successful man, and he hoped to pass along all his success to his children.

For many years all went well, but the younger son began to feel unhappy with his life. He grew bored with the work he did and was tired of his family. Restlessness at last overcame him, and he went to his father and told him he must leave. “I’m unhappy here, and I must find something new to do. Please give me the share of your fortune that you planned to leave to me, and let me spend it while I am young and able.”

The father was troubled to hear of his son’s unhappiness, and he worried that the lad might not fare well in the world. Still, he wished only happiness for both his boys, and so he divided the inheritance he meant to leave them one day and reluctantly gave his younger son the money.

The lad was thrilled and was soon ready to be off to the city to enjoy his fortune. However, though he had worked well in his father’s home, once he was on his own, his discipline vanished. He loved the money in his pockets, and he spent it on fine food and parties. He bought himself and his new friends gifts, and sometimes, after a night of carousing, he slept until noon. He thought, now and then, of finding work, but he still had so much money, he decided this could wait. And so he lived his life as he wished, doing whatever he dreamed of doing, going wherever he wanted.

Then one day he realized that his money was beginning to run out. “Never mind, there’s bound to be more where that came from,” he thought, and he went on spending, until at last he had not a single coin in his pocket.

That night he went hungry, and he began to imagine the horrors he might face. What would happen when he could not pay his landlord? What would he wear when his clothing wore out? How would he make friends if he had nothing to offer, and whom would he turn to when he needed a meal, a place to live? His friends, in turn, began to disappear. No one wanted to spend time with a pauper in need. Not one of his friends wanted to part with his own money.

The lad would have to find work. He remembered his days of toiling in his father’s fields. He knew how to do many things; his father had taught him well. Surely some farmer would hire him to work in the fields. And so he began to walk, stopping at each farm he saw to ask for work.

Alas, he had not noticed that the year had been a difficult one for nearly everyone. The harvests had been meager. People were struggling to find enough to eat and to feed their own children. None of the estate owners had enough to pay an extra lad, and besides, he did not look trustworthy. His skin was pale; he had lost his muscles; drink and indolence had left him listless and weary.

One day a farmer took pity on the young man and hired him to work in his pigsty. “I have little to offer,” the farmer said, “but you may sleep in the hay mow, and I will feed you for your work.” Now the lad worked long, hard hours, but seldom had enough to eat.

When he awoke one morning, he looked around and realized how foolish he had been. “Here I am struggling and unhappy when I could be living among those who love me. Why did I ever leave my father’s home?”

When he remembered his father, his heart grew heavy, and he wept remembering the fun he and his brother had had. True, they had worked hard, but they had enjoyed companionship and comfort, and when he thought of how he had broken his father’s heart, he wept harder still. “How could I repay such a wonderful man for the betrayal I have shown him?”

Still, the longer he thought about his father and brother and his old home, the more his heart longed to return. So he set off for his father’s home. He walked for days, weak and exhausted from hard work and hunger.

The father, for his part, had missed his son terribly. He had always hoped he might hear from the boy, but he had never heard a word, and sometimes he would weep for hours remembering his child. But he dreamed that his son was safe and well and happy.

One day, just as he was thinking of the lad, he looked across his fields and saw in the distance a figure coming toward him. He stared in wonder and thought his eyes must be playing tricks on him, for the stranger looked so remarkably like his son. The stranger was thin and pale, but a father always knows his child, and he knew this was his son, returning home. He raced toward the boy, calling joyfully to all his workers, “My son has returned!”

When they met, the boy fell upon his father. “Can you ever forgive me? I have been dishonorable, and I have lost your fortune. I do not deserve to be your son, but I pray you will receive me home.”

The father did not hesitate for one moment. He embraced his son and kissed his cheeks and wiped away the boy’s tears. “Welcome home. This has always been your home, and it will always be.”

Back at the house, the father demanded that his workers prepare a great feast to celebrate the son’s return, and he ordered salves to heal his hands and feet, and a hot bath to cleanse him. He offered clothing and a comfortable bed. “Anything you wish, my son.”

At that moment, the older son returned from his long day’s work in the fields. When he saw his brother, dressed in fresh clothing, surrounded by all the comforts of his father’s home, he angrily said to his father, “I must talk with you, in private, please.” He drew the old man outside. “How can you forgive a faithless lad when you have a son in me who always have been and always will be faithful?”

The old man embraced his older son. “I love you, and I am grateful beyond all measure for your faithfulness, but I must rejoice at your brother’s return. My heart cannot help itself. He was lost, and now he is found, and I wish you to celebrate my joy with me. We will love each other always, and well.”

And the older son, seeing his father’s joy, could not help but feel joy of his own, and so they returned to the house together and embraced the prodigal son.