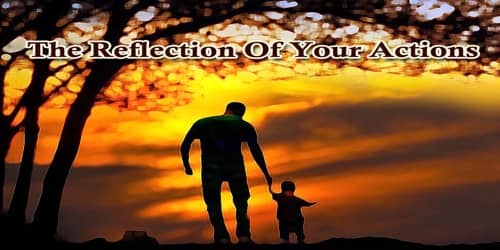 The Reflection Of Your Actions

A man and his son were going through the forest hills. Suddenly, the boy fell down on the trail and screamed with pain, “Aah!” Surprisingly, he heard the same voice from the mountain, “Aah!”

Annoyed By this, the boy asked his father, “Father, What is going on? Who is this?”

The son was very surprised but he still could not understand what was happening.

The father explained, “Son, people call it resonance, but this is the truth of life. Life is a reflection of your actions. What you will give to others, you will receive the same in return.”

Moral of the story: ‘What we give to others, life gives us the same in return. Your life is not an accident or a coincidence, but it is the shadow of your actions.’