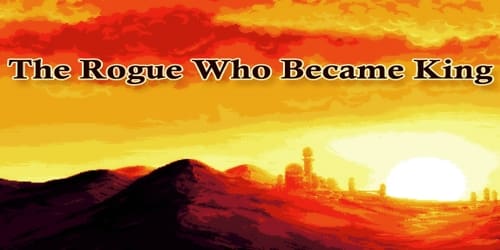 The Rogue Who Became King

Once, long ago, in a tiny Arab village, there lived a clever man who wanted to be king. The trouble was, the villagers did not like the man. “He’s a rogue,” they said. And he always did try to outsmart the other villagers, playing tricks on them. When he fooled someone, he laughed and laughed, but the others did not think him funny.

At last, the villagers grew so tired of the rogue; they decided to get back at him for all his pranks. They came up with a plan to rid their village of this troublemaker.

The next day, as the rogue was walking alone in the countryside, a group of villagers leaped out from behind a bush and grabbed him. They quickly tied him with a strong rope to a tree.

“Stay here and think about the suffering you have inflicted on us all these years,” the villagers said. “You’ll have all day to think, and then, at nightfall, we’ll return and toss you into the sea. The current will carry you far from our land.”

With that the villagers walked away, leaving the poor rogue to contemplate his terrifying future.

The rogue was worried, to be sure. He could not swim, and he did not relish the idea of being tossed into the chilly sea. The current was strong, and he knew he would never be able to withstand its force.

As he was thinking about his fate, a shepherd passed by, leading his flock of sheep. “Why are you tied up like that?” the shepherd asked the rogue.

“Ah,” the rogue said, and his eyes twinkled with delight, for he knew just what he could do. “Ah, poor me. Some men tied me up and left me here because I would not take their money.”

The shepherd was confused. “But why? Why would you not take their money?”

“Well,” said the rogue, very sadly, “I am a contemplative man. They wanted to corrupt me with coin, but I will not be bribed to be a bad man. I wish to be good and kind and generous and thoughtful, and I have no need for money.”

The shepherd looked this way and that, puzzled by this strange situation but intrigued as well. The shepherd thought he would very much like to have that money. Seeing no one nearby, he leaned close and whispered to the rogue: “Let us change places. That way I can save you from the godless ones and their bribes. You may take my sheep and lead the contemplative life of a good shepherd.”

The rogue agreed to the plan, and the shepherd untied him. Then the rogue tied the shepherd to the tree, and he set off into the countryside, leading the sheep.

When night fell, the villagers returned to the tree. It was very dark, and no moon shone, so they did not notice that the man tied to the tree was not the rogue. They surrounded him, quickly untied him from the tree, placed a sack over his head, and then they threw him into the sea. The current swiftly carried the shepherd far, far away.

The villagers, pleased that they had rid themselves of the difficult rogue, hurried home and went to sleep.

In the morning, as the villagers set off for work, they were astonished to see the rogue, fit as ever, walking through the village square, leading a flock of sheep.

“This I,” said the rogue cheerfully.

The rogue smiled. “Ah, you see, there are many kinds of spirits living in the sea, and they reward all those who jump in. For my troubles with the cold water and the strong current, the sea spirits gave me this flock of sheep and tossed us all upon the shore.”

When the men heard this, they ran at once to the cliffs, and in less time than it has taken to tell this tale, they jumped into the cold, churning water. None of them ever returned.

And that was how the rogue took over the village, for when the others heard that the sea spirits had blessed this man, they declared him king.