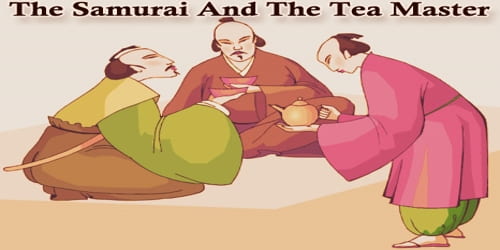 The Samurai And The Tea Master

A samurai warrior is as spiritual as a monk. He is the ruler of his mind as much as of his body. He trains his spirit through the form of meditation known as Zen. He can sit still for hours on end, gradually reducing his thoughts until his sole focus is on his breath. No base passion, fear, discomfort or excitement shall control him even for a single second. He can endure the bitterest cold or the fiercest heat. When faced with death itself, his mind is perfectly still. The odds, the dangers, and the enemies may be massively against him and yet his concentration, as sharp as his sword, may cut through them all.

Yes, he is a spiritual being indeed but his spirit is the distilled essence of violence.

Such self-control is not confined to the fighters of Japan, however. The Master of the Japanese tea ceremony performs his peaceful duties with just the same concentration and focus of attention, as this story from Ancient Japan shows.

Several centuries ago, a tea master worked in the service of Lord Yamanouchi. No one else performed the way of the tea to such perfection. The timing and the grace of his every move; from the unfurling of the mat to the setting out of the cups, and the sifting of the green leaves, was beauty itself. His master was so pleased with his servant, that he bestowed upon him the rank and robes of a samurai warrior.

When Lord Yamanouchi traveled, he always took his tea master with him, so that others could appreciate the perfection of his art. On one occasion, he went on business to the great city of Edo, which we now know as Tokyo.

When evening fell, the tea master and his friends set out to explore the pleasure district, known as the floating world. As they turned the corner of a wooden pavement, they found themselves face to face with two samurai warriors.

The tea master bowed, and politely steps into the gutter to let the fearsome ones pass. Although one warrior went by, the other remained rooted to the spot. He stroked a long black whisker that decorated his face, gnarled by the sun, and scarred by the sword. His eyes pierced through the tea maker’s heart like an arrow.

He did not quite know what to make of the fellow who dressed like a fellow samurai, yet who would willingly step aside into a gutter. What kind of warrior was this? He looked him up and down. There were broad shoulders and the thick neck of a man of force and muscle? Instinct told him that this was no soldier. He was an impostor who by ignorance or impudence had donned the uniform of a samurai. He snarled, “Tell me, oh strange one, where are you from and what is your rank?”

The tea master bowed once more. “It is my honor to serve Lord Yamanouchi and I am his master of the way of the tea.”

“A tea-sprout who dares to wear the robes of samurai?” Exclaimed the rough warrior.

The tea master’s lip trembled. He pressed his hands together and said, “My Lord has honored me with the rank of a samurai and he requires me to wear these robes.”

The warrior stamped the ground like a raging a bull and exclaimed, “He who wears the robes of a samurai must fight like a samurai. I challenge you to a duel. If you die with dignity, you will bring honor to your ancestors. And if you die like a dog, at least you will be no longer insult the rank of the samurai!”

By now, the hairs on the tea master’s neck were standing on end like the feet of a helpless centipede that has been turned upside down. He imagined he could feel that edge of the samurai blade against his skin. He thought that his last second on earth had come.

The corner of the street was no place for a duel with honor, however. Death is a serious matter, and everything has to be arranged just so. The samurai’s friend spoke to the tea master’s friends and gave them the time and the place for the mortal contest.

When the fierce warriors had departed, the tea master’s friends fanned his face and treated his faint nerves with smelling salts. They steadied him as they took him into a nearby place of rest and refreshment. There they assured him that there was no need to fear for his life. Each one of them would give freely of money from his own purse, and they would collect a handsome enough sum to buy the warrior off and make him forget his desire to fight a duel. If by chance the warrior was not satisfied with the bribe, then surely Lord Yamanouchi would give generously to save his much-prized master of the way of the tea.

These generous words brought no cheer to the tea master. He thought of his family, and his ancestors, and of Lord Yamanouchi himself, and he knew that he must not bring them any reason to be ashamed of him.

“No,” he said with a firmness that surprised his friends. “I have one day and one night to learn how to die with honor, and I will do so.”

So speaking, he got up and returned alone to the court of Lord Yamanouchi. There he found his equal in rank, the master of fencing; he was skilled as no other in the art of fighting with a sword.

“Master,” he said when he had explained his tale, “Teach me to die like a samurai.”

But the master of fencing was a wise man, and he had great respect for the master of the tea ceremony, so he said, “I will teach you all you require, but first, I ask that you perform the way of the Tea for me one last time.”

The tea master could not refuse this request. As he performed the ceremony, all trace of fear seemed to leave his face. He was serenely concentrated on the simple but beautiful cups and pots, and the delicate aroma of the leaves. There was no room in his mind for anxiety. His thoughts were focused on the ritual.

When the ceremony was complete, the fencing master slapped his thigh and exclaimed with pleasure:

“There you have it. No need to learn anything about the way of death. Your state of mind when you perform the tea ceremony is all that is required. When you see your challenger tomorrow, imagine that you are about to serve tea for him. Salute him courteously, express regret that you could not meet him sooner, take off your coat and fold it as you did just now. Wrap your head in a silken scarf and do it with the same serenity as you dress for the tea ritual. Draw your sword, and hold it high above your head. Then close your eyes and ready yourself for combat.”

That is exactly what the tea master did when, the following morning, at the crack of dawn he met his opponent. The samurai warrior had been expecting a quivering wreck and he was amazed by the tea master’s presence of mind as he prepared himself for combat. The samurai’s eyes were opened and he saw a different man altogether. He thought he must have fallen victim to some kind of trick or deception, and now it was he who feared for his life. The warrior bowed, asked to be excused for his rude behavior, and left the place of combat with as much speed and dignity as he could muster.

And that was the story of The Samurai and the Tea Master. Bertie loves this story because it shows that if you can gain mastery over your mind and spirit, you can overcome almost any difficulty or danger. In fact, the impossible will soon become possible.