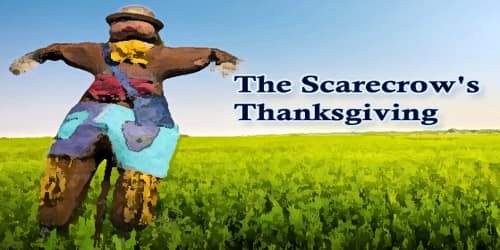 Long ago, on the shores of the St. Lawrence River, Owl perched in his willow tree and looked out at the world. “Hoo hoo,” he called out, and at the sound, all the wild creatures gathered. They respected Owl and always came when he called.

“Now look at this,” Owl said, and he gazed around. The others looked too. And they saw, as if they never had seen before, a field of fat orange pumpkins looking cheery and ripe, and a field of golden corn, and yet another field, this of waving wheat, and bright blue morning glories streaming over stone walls. They saw gardens of peas and beans, squash and cabbage, wild mushrooms and mums. They saw riotous red maple leaves and dazzling yellow poplars and burnt-orange leaves on the oaks.

“And just look at that sky!” Owl said.

“It’s the color of the Caribbean Sea,” Raccoon said.

“You’ve never seen the Caribbean,” Turtle snapped, but Goose honked and said, “He knows, though, that it’s as beautiful as our sky.”

The animals were quiet for a time, thinking about the beautiful things in their world. Then little Snail, whose eyes were closing as they usually were, piped up. “Owl, why did you call us to gather?”

“We’re going to have a feast,” Owl said, “to give thanks for all that we have. We’ll celebrate our world and our friendship.”

The others agreed. “Of course we must give thanks,” Butterfly said, “for our colorful shade.” “And for the acorns,” Jay added. “And for the harvest moon,” Rabbit said. “And for the lofty oaks,” Mouse squeaked.

So they set to work. Some dug potatoes and some collected seeds; others picked sweet peas and apples and corn; others plucked squash and zucchini from their long, hearty stems. They shucked and stirred and mixed and mashed, working to make a great feast.

“A feast!” the ants cried as they marched toward the delicacies stowed away in a clearing. “A feast it is!”

That first day no one rested, not even at night, but by the second day, they grew weary of labor. “We’ll feast the day after tomorrow,” Owl said. “For now, everyone sleeps. We need to rest.”

That night all the creatures slept, but Owl kept vigil, his round eyes blazing into the dark sky, guarding their treasure. So it was Owl who saw the trouble coming, just as the first flush of dawn brightened the horizon.

At first, it looked like an enormous black cloud, but Owl could feel the air growing cooler, moving faster as if the cloud were pushing all the air toward him. And then he heard it, like traveling thunder, growing louder and closer.

And then he saw them. The Crows were on the wing, rushing toward the gathered food. Down they swept, one after another, their beaks snapping at peas and beans and squash and cabbages, at apples and peppers and sweet potato pies.

“Yum yum, eaten up,” the Crows cried, and that’s exactly what they did. They ate up every single last crumb. Then they swept into the sky and disappeared.

When the animals awoke, they wept at the sight of all their hard work lost.

So once again they gathered food, and this time they also gathered straw and cloth, and they made themselves a scarecrow to stand guard.

“But do you think he’ll do the job?” The frog croaked, eyeing the cheerful scarecrow. He was skeptical by nature.

“He will,” Owl promised them.

The next dawn, while the creatures still were sleeping, the black cloud swept across the sky again. Owl watched as they swooped down, lower and lower, closer and closer. For one moment, Owl closed his eyes. “Oh no,” he thought. “This isn’t going to work at all.”

But when he opened his eyes, his eyes grew even rounder.

Scarecrow had come alive. He was dancing now, twirling on his pole, waving his arms and talking. “Crows,” Scarecrow called, and the Crows hovered above him, waiting, worried. “Crows, listen up. We want you to join the feast. Thanksgiving is for everyone, but you have to learn how to share.”

“Scarecrows can’t talk,” the lead Crow said nervously, turning his head this way and that. “Scarecrows are made of straw and stuff.”

“Oh, we can talk when we have something important to say,” Scarecrow said. “And this is important. If you will share, you are welcome to stay and have some sweet potato pie. Otherwise, I’m afraid I’ll have to chase you away.”

Naturally, the Crows did not know what to think, but they had no reason to distrust Scarecrow’s words.

“Yes. Thanksgiving is a celebration of everything and everyone.”

And so, ever since that first Thanksgiving Day on the banks of the river, the Crows have wondered about Scarecrows, but every year they join their fellow-creatures for a joyous feast of celebration.