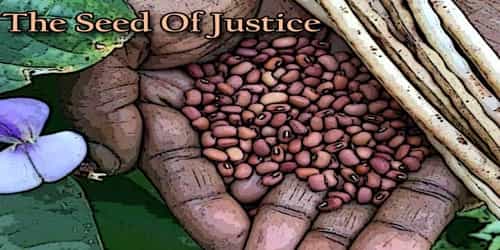 The Seed Of Justice

Once upon a time in China, a farmer worked hard to feed his family. He worked from dawn until nightfall each day, but no matter how hard he worked, he remained poor.

One day, as he was growing older, the man took his rice to the market to sell. The sky was cloudy and bleak. Few people came to the marketplace; hours passed, but the man had not sold a single grain of rice. His stomach began to growl with hunger, and his mind began to wander with thoughts of food. He closed his eyes and imagined a table full of fruits and vegetables, of rice and fish, and soon his mouth began to water. When he opened his eyes, he discovered a pear in his hand.

Sure enough, he had stolen a pear, and a nearby merchant had seen him. “Thief!” the merchant cried. “You have taken a pear from my stall. You will be punished!”

The merchant sent for the Emperor’s guards. The guards grabbed the poor farmer and dragged him to their master for judgment.

The Emperor sat upon his throne passing judgment on the various crooks and thieves who came before him. When the guards brought the farmer to face judgment, the Emperor grimaced. He did not like the look of the farmer, with his ragged clothes and his skin as dry as parchment.

“What has he done?” the Emperor asked impatiently.

The merchant spoke. “I was in the marketplace trying to earn an honest living when this thief came and stole a pear. He was just about to eat the pear when I caught him. His mouth was watering, and he seemed not to have a care in the world.”

Emperor grimaced again. “I shall pass judgment, now,” he began, ready to sentence the man to prison, but at that moment, the farmer stepped forward and said, “Pardon me, but if you don’t mind, I would like to speak before you sentence me.”

“What have you to say?” the Emperor snapped. The law of the land permitted the accused to speak, but the Emperor was irritated. He had many more cases to hear.

“I would like to give you a gift,” the farmer said humbly. “I wish to offer you a gift beyond compare.”

What could such a poor man have to offer an emperor? Everyone wondered, and the Emperor, as curious as all the others, asked, “What could you have that would be a gift for me?”

The farmer pulled a seed from his pocket. “This,” he said, holding the seed out for the Emperor to see. “This is a pear seed, but it is no ordinary pear seed. It is a magical pear seed, and if you plant it, it will grow overnight, and in the morning the plant will be bursting with gold coins. Every day it will blossom with new gold.”

The Emperor was very pleased with this notion. He was wealthy, but he loved the thought of becoming wealthier still. A pear seed that sprouted gold coins was a perfect gift. “Plant it,” the Emperor said. “We shall walk outside, and you will plant this seed. In the morning we will see what has happened.”

The Emperor looked in horror at the man, for he had, in his lifetime, cheated, and he might even have stolen a little, and he thought he must have committed some criminal acts he could not remember. So he backed away and said, “I am emperor. I do not plant crops. Call my advisers.”

One by one the advisers stepped up to the hole, and one by one they backed away. Each one offered some excuse. “I have a bad back,” said the first advisor. “I cannot bend down to plant the seed.” “I have always had bad luck with crops,” said a second. “It is better if someone else plants this seed.” “I will sneeze if I bend too close to the ground,” said a third, “and I will blow away the seed. Someone else must plant it.”

Every one of the advisers refused to plant the seed, for each knew he was not completely guilt-free. They stood trembling before the hole in the ground.

At last the thief spoke again. “No one will plant the seed because not one of you has never lied or cheated or stolen or committed a criminal act. And I, a poor man, stole a single pear because I was starving.”

The Emperor listened closely to the thief.

“Do you think punishing me is just?” the thief asked.

The Emperor thought a while and looked around at all his advisers, and at last, smiled and said to the farmer, “You are free to go. And thank you for your lesson injustice.”

The farmer happily returned home, and afterward, he told the tale of the just Emperor.