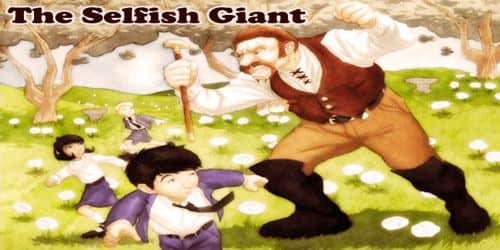 Once there was a selfish giant who had a large and beautiful garden. The garden was full of soft green grass. Here and there all over the grass stood many colorful flowers like stars. The birds sat on the trees and sang so sweetly. The garden was a nice playground for the beautiful children. As a result, the children used to play in the garden making the garden more beautiful. But one day, the giant saw the children playing. As the giant was selfish, he could not tolerate this beautiful sight and accordingly he forbade the children to play in his garden.

‘My own garden is my own garden,’ said the Giant; ‘anyone can understand that, and I will allow nobody to play in it but myself.’ So he built a high wall all around it and put up a notice-board.

Consequently, the children were shocked and stopped playing there. The children were very sad. Every day they walked past the wall and remembered the beautiful garden. But the immortal God could not bear this sort of atrocity. After this incident, no flowers bloomed in the giant’s garden and it became barren. The giant came to his senses and requested the children to play in the garden but it was too late. The children did not respond to his request and never played in the garden, as a result of which it lost its previous charms.