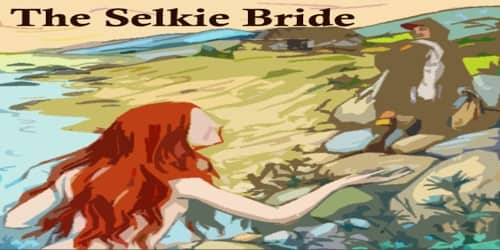 Long ago, on the wild Scottish coast, a fisherman spent all day at sea but caught only a few small fish. The night began to fall, and still, the fisherman had only a meager catch. Sadly, he rowed to shore and beached his boat. As he walked across the pebbly shore toward his cottage, he heard the astonishing sound of singing voices. He turned and saw, as few people have seen, several Selkie people playing onshore. Quickly he moved back toward the beach, but when the Selkie people saw him, they slipped into the sea and disappeared beneath the dark waves.

The fisherman could not believe his eyes. He knew few people ever saw Selkies. These seal folk cast aside their skins now and then to come onto shore in human form.

“I must’a been dreaming,” he said, and again he turned toward his cottage. But this time as he turned, he caught sight of sealskin lying on a nearby rock. He picked up the skin and slung it over his shoulder. “No one will believe me unless I show them this,” he said. He also thought he might earn a penny or two by selling this amazing find.

As he followed the path to his cottage, he heard someone wailing behind him. When he turned, he saw a beautiful young woman sobbing uncontrollably.

“Beautiful lady,” said the fisherman, “why do you weep?”

“Kind sir,” the lady replied through her tears, “you have my sealskin. Please give it back, for I belong to the Selkie people, and I cannot live in the water without my skin.”

The fisherman had fallen in love at first sight with the woman. And because he was young and headstrong, he thought he must have her, and would not return her sealskin. “Come with me and be my wife,” he said. “I love you, and without your sealskin, you’ll have to live on land.”

“No, please, sir,” cried the young woman. “My folk will be worried about me, and I shall never be happy on land.”

But the young fisherman was determined to make this beautiful lady his bride. “My cottage is a cozy place, and I will keep you warm by my fire and I’ll feed you fresh fish, and I promise you will live a happy life on land.”

The young woman knew she could do nothing, for the fisherman was determined, and he refused to return her sealskin. And so, crying and sighing, she followed him home to his cottage. The fisherman hid the sealskin in his jersey for many days afterward, afraid his beautiful bride-to-be would slip away.

After a while, she settled down to life in the cottage, and when he saw that she was happier, he stuffed the sealskin inside a crevice in the chimney where he knew she would never find it. Soon afterward they married, and all in all, they led a happy life, quiet and peaceful.

For many years they lived together, and the Selkie woman learned to love her husband, for he had a kind and generous heart. She gave birth to seven children, and he was a good father.

She would shake her head and kiss them and say, “You would not understand, children. But never mind. I’ve simply been dreaming too long.”

One day the fisherman and the three eldest children went to sea in their boat. The next three went to the village to buy some provisions. The mother and her youngest child were left at home alone.

The woman looked out the window of the cottage and saw the waves crashing onshore. Far away she could see, on the slick, black rocks, the seals playing and barking and singing. She sighed deeply, and her youngest child said, “Mother, you look so sad whenever you look at the sea.”

Without thinking, the woman said, “That’s because I was born in the sea, and that is the home to which I can never return because your father hid my sealskin.”

Now the child, like all children in Scotland, had heard tales of the Selkie folk, and she knew right away what her mother was. At once she ran to the chimney and pulled the sealskin from its hiding place.

“When I was here alone with father once, he took this from its place and stared at it. I knew it must be something special, and now I know what it is.”

The woman embraced the sealskin, and then her child. “My darling child, I’ll always love you,” she said, and then, clasping the sealskin to her heart, she ran toward the sea. There, slipping into her skin, she dived into the sea.

As soon as the woman leaped into the water, the other seals dived from their slippery rocks and swam toward her, and the child could hear their joyous cries. She knew that she had done the right thing.

Not long afterward, the fisherman passed a group of seals as he rowed toward shore. As he passed he noticed a slender female seal who gazed at the boat with a strange expression on her face. And then, letting out a sad, farewell cry, she dived into the water. She was never again seen onshore.

Though the fisherman missed his wife and the children missed their mother, they knew she was happy in the world where she belonged, and her happiness gave them a measure of joy.