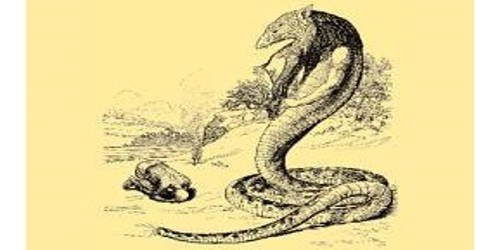 The Serpent’s Island (A Tale From Egypt)

Long ago, during a time of peace in Egypt, many explorers journeyed in search of treasures. Ship captains and sailors returned to their land with spices and jewels for the Pharaoh. They brought tales, too, for the Pharaoh loved stories of the world beyond his horizons and the lessons they taught.

One day a sailor came to the Pharaoh and bowed before him. In the custom of the day, he said, “Life, health and strength be to you,” and began to tell this tale:

“I sailed from home on a great ship,” he said. “One hundred sailors rowed our ship. Each man was strong and brave, and we rowed for many days. We sailed across the Red Sea and into the ocean beyond. All was well when suddenly a great storm rose from the east. The wind thrashed our ship, whipping us toward land, and waves broke over us. Terrified, I grabbed a piece of wood and threw it overboard, and then I threw myself over as well and held onto the wood for dear life. I prayed and then watched in horror as our ship was crushed upon the shore. Tears filled my eyes, but I had no time to mourn, for at that moment another wave rose up and cast me and my plank upon the shore.

“There I lay upon the sand, panting for breath. With the little strength I had left, I crawled to a grove of trees for shelter, and there I lay, watching the sky turning purple, listening to the howling wind.

“The storm raged for two days, but at last the sun broke through a blanket of clouds. I thanked the gods who saved me. And then, for the first time, I looked around and I saw that I was all alone in a land of plenty. Figs and grapes grew from the vines and trees, and the ground was thick with herbs and berries. When I walked deeper into the thicket I found gardens dense with fruit, and when I walked back to the sea I saw more fish than it is possible to imagine.

“I was beginning to feel at peace when suddenly I heard a roar like thunder. I threw myself behind the bushes, certain that a tidal wave was about to sweep me out to sea once more. The trees bent low to the ground. The sky turned dark. The earth trembled.

“But then the sound stopped, and again I felt the sun on my shoulders. I opened my eyes and saw an enormous serpent with a beard the color of rainbows and a body covered with golden scales. He was crawling toward me.

“The serpent slithered closer, reared his head high, and in a grumbling voice asked, ‘What has brought you here, little man?’ The serpent reached down and picked me up in his jaws, careful to cause me no harm. He carried me to the beach and lay me down before him. ‘Speak quickly now,’ the serpent said.

“I told him I had sailed for the great Pharaoh of Egypt. I told him of our ship lost in the storm, and when I had finished, he nodded. He told me Amen-Ra had sent me to this island of the blessed, for that is what he called his island. And then he told me of my future. He said I would remain on his island until four months had passed, and after that, a ship would come and carry me to safety. He told me I would die in my own city, that I would rest in the tomb I had prepared.

“And now I tell you the most wondrous part of this adventure. The serpent brought before me his family, 75 serpents in all. Only one stranger before me had ever come to them, a girl who appeared on the island one day in a cloud of fire. But she showed no kindness to the serpents and had no patience. He told me I must have patience and kindness, and that I would be rewarded. The girl without patience had thrown herself into the sea, for she did not trust the serpent’s word. No one ever saw her again.

“I bowed to him, and promised that if all came to pass as he predicted, I would bring his tale to the Pharaoh and speak of his greatness, and I told him I would send a ship to him filled with the riches of Egypt. He laughed. ‘We have all the riches we need here,’ he said, and from that day on, he and his family showed me all manner of kindness. I waited patiently and trusted the serpent’s word, for I knew he spoke with the blessings of Amen-Ra.

“Four months after I arrived, a ship appeared on the horizon. I climbed into a tree to see who sailed, and I saw men of Egypt. I waved farewell to the serpent and again promised him riches.

‘Return in safety to your home,’ was all he said, and he gave me precious gifts of perfume and incense, kohl and ivory. When I climbed aboard the ship, the island seemed to float away from us. Night fell, and when the moon rose, the island was gone, as if it had never existed.

“We sailed north toward home for many weeks. Now I have come to you, Pharaoh, for I wish to offer you the gifts of the serpent. And I want to tell you that Amen-Ra watches over us all.”

When the sailor finished his tale, the Pharaoh was so moved that he called to his chief scribe and commanded him to set the story down on a roll of papyrus. And so the story of the shipwrecked sailor and the serpent has lasted to this day, though no one ever again saw the island.