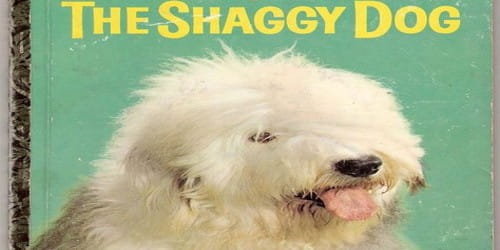 The Shaggy Dog (An American Folktale)

Once there was a woman who owned a shaggy dog. She loved her dog a great deal and was proud of his very shaggy coat. The woman took the dog with her everywhere she went.

It happened that once the woman and her dog traveled by ship to England, and when they were traveling home, somewhere between England and New England, where the woman and her shaggy dog lived, the dog disappeared. She called his name and searched as best she could, but he did not return.

The woman realized her dog was lost and she became frantic with worry. She decided to place an advertisement in the newspapers. Her advertisement read like this:

“LOST, A VERY SHAGGY DOG. Big reward for anyone who finds my shaggy dog. All expenses of the finder will be paid. My dog is a VERY shaggy dog.”

The woman attached her address to the advertisement.

Well, not long after the advertisement ran in the paper, the woman’s doorbell rang. When she answered the door, she saw a man standing beside a shaggy dog. “Is this your dog, ma’am?” the man asked.

The woman laughed. “Oh no,” she said. “This dog isn’t nearly as shaggy as my shaggy dog.”

The next day two people arrived, each one leading a shaggy dog by a leash. “Hello,” they said. “Is either of these two dogs your shaggy dog?”

Before long dozens of people began to arrive at the woman’s door. Each person who came arrived with a shaggy dog. Day after day people came. They would stand on her doorstep and smile at the woman and point happily down at the shaggy dog they led.

The woman shook her head each time.

Alas, none of the shaggy dogs was shaggy enough.

“Oh my,” the woman said as she surveyed the line of shaggy dogs. “These dogs aren’t shaggy enough. My dog is a VERY shaggy dog.”

One day a dog arrived who was very shaggy.

The woman looked down at that dog and smiled. She knelt to pat her shaggy dog, but when she looked closely she shook her head. “Well, he looks a lot like my dog,” she said at last, “but my dog is shaggier than this dog. My dog is very, very shaggy.”

This went on for months.

One day she received a letter from a man in England. It read like this:

“Dear Madame: I have found a dog who fits the description of your very shaggy dog so closely and is so very shaggy that I am quite sure this must be your very, very shaggy dog. Please send plane fare and I will happily return your dog to you.”

The woman sent the plane fare to England.

The big day arrived. The woman heard the doorbell rang, and as she ran to the door, she could feel her heart pounding with excitement.

When she opened the door, she saw a man from England. Beside him stood a very, very, very shaggy dog.