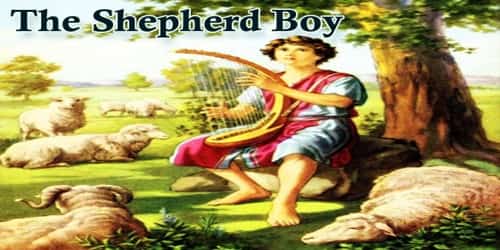 There was once on a time a shepherd boy whose fame spread far and wide because of the wise answers which he gave to every question. The King of the country heard of it likewise, but did not believe it, and sent for the boy. Then he said to him, “If thou canst give me an answer to three questions which I will ask thee, I will look on thee as my own child, and thou shalt dwell with me in my royal palace.” The boy said, “What are the three questions?” The King said, “The first is, how many drops of water are there in the ocean?” The shepherd boy answered, “Lord King if you will have all the rivers on earth dammed up so that not a single drop runs from them into the sea until I have counted it, I will tell you how many drops there are in the sea.”

The King said, “The next question is, how many stars are there in the sky?” The shepherd boy said, “Give me a great sheet of white paper,” and then he made so many fine points on it with a pen that they could scarcely be seen, and it was all but impossible to count them; any one who looked at them would have lost his sight. Then he said, “There are as many stars in the sky as there are points on the paper; just count them.” But no one was able to do it.

The King said, “The third question is, how many seconds of time are there in eternity.” Then said the shepherd boy, “In Lower Pomerania is the Diamond Mountain, which is two miles and a half high, two miles and a half wide, and two miles and a half in depth; every hundred years a little bird comes and sharpens its beak on it, and when the whole mountain is worn away by this, then the first second of eternity will be over.”

The King said, “Thou hast answered the three questions like a wise man, and shalt henceforth dwell with me in my royal palace, and I will regard thee as my own child.”