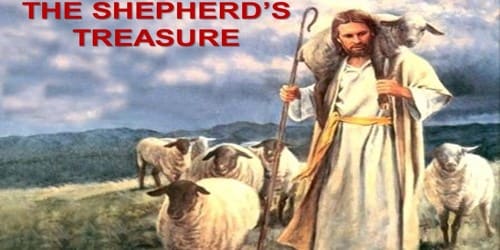 The Shepherd’s Treasure Chest (A Tale From Ancient Persia)

Once upon a time, a Persian shepherd lived simply in a hillside cave. He owned nothing but a staff and a sheepskin that he wore over his loincloth to keep from shivering with cold. At night he wrapped himself in the warm skin and slept in peace.

The shepherd was a poor man, but he was rich in wisdom. He attended closely to all he saw and heard. He knew the ways of all the animals and the cycles of nature. He knew the sky, the stars, the songs of every bird. His powers of observation were so keen that people who spoke to him believed him to be the wisest man in all the world.

After many years, word of the shepherd’s wisdom spread throughout the land until at last, it reached the shah, ruler of all the people.

“I must meet this man,” the shah told his advisers. “I must see for myself if he is as wise as people say he is.”

The shah put away his jewels and silk clothing. “I wish to meet the shepherd and test him, but he must not know who I am,” he told his puzzled advisers. They shook their heads, but the shah was determined. Dressed in a tattered cloak, carrying only some fruit and cheese in a small sack, the shah got on the back of a tired old mule and rode into the hills beyond the city.

He rode for miles and miles, gazing at the emptiness of the desert and wondering how a wise man could live in such a barren land. After several days, he saw a cloud of dust ahead of him. Riding closer, he saw this was a flock of sheep grazing on the sparse shrubs that grew on a hillside. “You must have a fine master,” the shah said, “for you seem so at peace.”

“I am their master, sir. Welcome to our humble home,” came the shepherd’s voice from the nearby cave. “Please, may I offer you some water. You look tired and thirsty.” With that, the shepherd spread his beloved sheepskin upon the earth and welcomed the stranger to sit. “I can see from the dust on your clothing and your mule that you have traveled many miles,” he said as he offered the shah a flask of water.

The shah sat down and the two men began to talk. The shah asked the shepherd many questions. As he listened to the man’s answers, he was impressed by the shepherd’s dignity and clear thinking. After many hours, the shah stood and said, “I must go now, for I am but a poor traveler with many more miles to go.”

The shepherd stood and bowed, but a smile danced on his lips. “Forgive me, sir, but I know you are no poor traveler for you wear your clothing with grace. Your speech is elegant, and from the way you look into my eyes when you speak, it is clear you are a man who is accustomed to commanding people. You are courteous, so I know you must have greeted many men of every sort. I believe you are a king, sir. Am I not speaking to the shah himself?”

“I am, sir!” the shah exclaimed joyfully. “And you are the wisest of all my subjects. I wish to make you governor of every village you and your sheep have passed through.”

From that day on the shepherd became the governor of many villages. He lived in a house with a garden and wore fine clothes. He owned horses and warm clothing and a great bed so that he no longer had to wrap himself inside his sheepskin cloak.

At first, all the people were glad for the shepherd, for he had always been good to them. So he continued to be, but sad to say, some began to gossip. Wherever he traveled, the governor carried with him a great chest bound and locked. He guarded it as if it contained his very life.

“What is in that box he guards so carefully?” the gossips asked, and before long people began to guess. “It must be our taxes. He is stealing the shah’s money and hiding it in his treasure chest. He is stealing from us!”

“Yes,” others agreed. “He has grown dishonest!”

The shah was disturbed to hear this news. He traveled at once to the governor’s house, and as he drew near, he saw a cloud of dust rising from the earth before him. He grew sad as he remembered the first time he had seen the shepherd. “If only he had remained good,” the shah sighed as the governor and his servants rode quickly out from their homes to greet their king.

The governor dismounted and bowed to the shah.

The governor shook his head. “I have never taken anything,” he answered calmly.

“Show me what is in that treasure chest!” the shah demanded, for just as the people had said, the governor had brought the locked chest with him.

He pulled out his tattered sheepskin.

As everyone watched in amazement, the governor held up the sheepskin. “This is my treasure,” he said as gently stroked the sheepskin. “I have kept it and guarded it all these years to remind me of the days when I wandered as a poor shepherd. I wanted never to forget my humble beginnings.”

When the shah heard these words, his eyes filled with tears. He took his faithful servant’s hand, bent low and kissed it. “From this day, my friend, you shall be the chief governor of our land, for you are surely the wisest and kindest of men.”

And that is how the poor shepherd who became a governor became the most respected man in the kingdom. Never did he forget his beginnings, and never did he give away his tattered sheepskin.