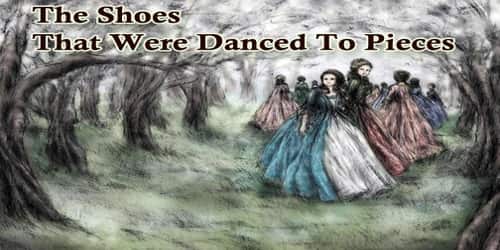 The Shoes That Were Danced To Pieces

There was once upon a time a King who had twelve daughters, each one more beautiful than the other. They all slept together in one chamber, in which their beds stood side by side, and every night when they were in them the King locked the door and bolted it. But in the morning when he unlocked the door, he saw that their shoes were worn out with dancing, and no one could find out how that had come to pass. Then the King caused it to be proclaimed that whosoever could discover where they danced at night, should choose one of them for his wife and be King after his death, but that whosoever came forward and had not discovered it within three days and nights, should have forfeited his life. It was not long before a King’s son presented himself, and offered to undertake the enterprise. He was well-received, and in the evening was led into a room adjoining the princesses’ sleeping-chamber. His bed was placed there, and he was to observe where they went and danced, and in order that they might do nothing secretly or go away to some other place, the door of their room was left open.

But the eyelids of the prince grew heavy as lead, and he fell asleep, and when he awoke in the morning, all twelve had been to the dance, for their shoes were standing there with holes in the soles. On the second and third nights it fell out just the same, and then his head was struck off without mercy. Many others came after this and undertook the enterprise, but all forfeited their lives.

Now it came to pass that a poor soldier, who had a wound and could serve no longer, found himself on the road to the town where the King lived. There he met an old woman, who asked him where he was going. “I hardly know myself,” answered him, and added in jest, “I had half a mind to discover where the princesses danced their shoes into holes, and thus become King.” “That is not so difficult,” said the old woman, “you must not drink the wine which will be brought to you at night, and must pretend to be sound asleep.” With that, she gave him a little cloak, and said, “If you put on that, you will be invisible, and then you can steal after the twelve.” When the soldier had received this good advice, he went into the thing in earnest, took heart, went to the King, and announced himself as a suitor. He was as well-received as the others, and royal garments were put upon him. He was conducted that evening at bed-time into the ante-chamber, and as he was about to go to bed, the eldest came and brought him a cup of wine, but he had tied a sponge under his chin, and let the wine run down into it, without drinking a drop. Then he lay down and when he had lain a while, he began to snore, as if in the deepest sleep. The twelve princesses heard that and laughed, and the eldest said, “He, too, might as well have saved his life.” With that they got up, opened wardrobes, presses, cupboards, and brought out pretty dresses; dressed before the mirrors, sprang about, and rejoiced at the prospect of the dance. Only the youngest said, “I know not how it is; you are very happy, but I feel very strange; some misfortune is certainly about to befall us.” “Thou art a goose, who are always frightened,” said the eldest. “Hast thou forgot how many Kings’ sons have already come here in vain? I had hardly any need to give the soldier a sleeping-draught; in any case, the clown would not have awakened.” When they were all ready they looked carefully at the soldier, but he had closed his eyes and did not move or stir, so they felt themselves quite secure. The eldest then went to her bed and tapped it; it immediately sank into the earth, and one after the other they descended through the opening, the eldest going first.

The soldier, who had watched everything, tarried no longer, put on his little cloak, and went down last with the youngest. Half-way down the steps, he just trod a little on her dress; she was terrified at that, and cried out, “What is that? Who is pulling my dress?” “Don’t be so silly!” said the eldest, “you have caught it on a nail.” Then they went all the way down, and when they were at the bottom, they were standing in a wonderfully pretty avenue of trees, all the leaves of which were of silver, and shone and glistened. The soldier thought, “I must carry a token away with me,” and broke off a twig from one of them, on which the tree cracked with a loud report. The youngest cried out again. “Something is wrong, did you hear the crack?” But the eldest said, “It is a gun fired for joy because we have got rid of our prince so quickly.” After that they came into an avenue where all the leaves were of gold, and lastly into a third where they were of bright diamonds; he broke off a twig from each, which made such a crack each time that the youngest started back in terror, but the eldest still maintained that they were salutes. They went on and came to a great lake whereon stood twelve little boats, and in every boat sat a handsome prince, all of whom were waiting for the twelve, and each took one of them with him, but the soldier seated himself by the youngest. Then her prince said, “I can’t tell why the boat is so much heavier to-day; I shall have to row with all my strength if I am to get it across.” “What should cause that,” said the youngest, “but the warm weather? I feel very warm too.”

On the opposite side of the lake stood a splendid, brightly-lit castle, from whence resounded the joyous music of trumpets and kettle-drums. They rowed over there, entered, and each prince danced with the girl he loved, but the soldier danced with them unseen, and when one of them had a cup of wine in her hand he drank it up, so that the cup was empty when she carried it to her mouth; the youngest was alarmed at this, but the eldest always made her be silent. They danced there till three o’clock in the morning when all the shoes were danced into holes, and they were forced to leave off; the princes rowed them back again over the lake, and this time the soldier seated himself by the eldest. On the shore, they took leave of their princes and promised to return the following night. When they reached the stairs the soldier ran on in front and lay down in his bed, and when the twelve had come up slowly and wearily, he was already snoring so loudly that they could all hear him, and they said, “So far as he is concerned, we are safe.” They took off their beautiful dresses, laid them away, put the worn-out shoes under the bed, and lay down.

The next morning the soldier was resolved not to speak, but to watch the wonderful goings-on, and again went with them. Then everything was done just as it had been done the first time, and each time they danced until their shoes were worn to pieces. But the third time he took a cup away with him as a token. When the hour had arrived for him to give his answer, he took the three twigs and the cup and went to the King, but the twelve stood behind the door and listened for what he was going to say. When the King put the question, “Where have my twelve daughters danced their shoes to pieces in the night?” he answered, “In an underground castle with twelve princes,” and related how it had come to pass, and brought out the tokens.

The King then summoned his daughters and asked them if the soldier had told the truth, and when they saw that they were betrayed and that falsehood would be of no avail, they were obliged to confess all. Thereupon the King asked which of them he would have to wife. He answered, “I am no longer young, so give me the eldest.” Then the wedding was celebrated on a self-same day, and the kingdom was promised him after the King’s death. But the princes were bewitched for as many days as they had danced nights with the twelve.