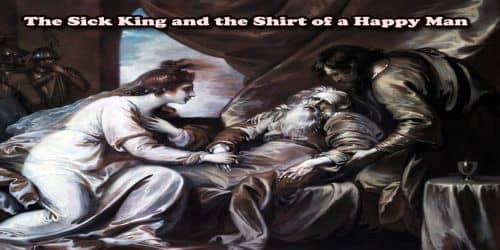 The Sick King and the Shirt of a Happy Man

Once a king became very ill. His physicians tried hard to cure him. But they somehow failed. Out of fear they could not tell the king that he was out of treatment. To avoid punishment one of the physicians advised the king that he could wear a shirt used by a happy man, he might be cured of his disease. Then the ministers of the king sent people away in all directions in search of a shirt used by a happy man. They were trying most sincerely to find out such a man. At one point in the process of their search, a farmer claiming to be a happy man said, “I am a happy man. I have a problem but poverty.” The people of the king could not accept him as a happy man; because a man having such an objection for poverty cannot be a happy man. In this way, they went on searching. But everyone raised some objection about their life.

At last, they found a woodcutter sleeping fast in the forest. When asked he told in a spontaneous tone that he was a happy man. He was fully satisfied with what he earned and what he had. He had no objection against. The people of the king considered him to be a perfectly happy man. Then they disclosed the great problem of the king. They asked the man if he had any shirt. The woodcutter happily and spontaneously said that he had only one shirt. The man without any hesitation drew out the dirty shirt out of his dirty bag and handed it to the people of the king. They saw that the shirt was very shabby torn at many places, and emitting bad smell.

However, they took it very eagerly and in a happy mind they returned to the palace of the king. The anxious king got relieved at this happy event and put on it very delightfully. And surprisingly enough, the king began to be healed and eventually he got completely cured.