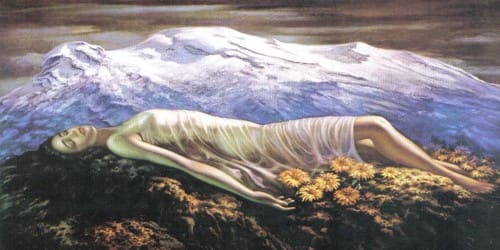 The Sleeping Mountains (A Tale From Mexico)

Long ago King Papantco ruled the Toltec people. They lived in Mexico’s Courtyard of the Sun. King Papantco deeply loved his only daughter. When she grew to be a young woman, he decided she would marry Jaguar, the son of his high priest, a maker of magic.

But the princess did not love Jaguar. “Please, father, do not make me marry him,” she begged.

The king smiled. “Daughter, you will learn to be comfortable just as Mother Corn learns to thrive even in the desert. The women have begun to prepare your wedding robe. You will marry soon.”

At that moment an elaborate procession approached the palace. Soon after, the guards, leading King Ixtli, ruler of the Chichimec people, marched into the king’s chambers.

Papantco was furious. The Chichimec and Toltec were bitter enemies.

“I will be quick,” Ixtli said. “Your people use our streams for their fishing. We are poor, but we are proud. Your people are not welcome in our land.”

And at the same moment, the princess touched Papantco’s shoulder. “Father, you are pale,” she said. “Go rest a while. I will speak to the prince.”

The kings departed, shouting insults at each other. The princess looked shyly at the prince and said, “I wish our tribes to unite and live in peace.”

“If my people could see the beautiful Toltec princess,” the prince said, “they would forgive all our past quarrels.”

“You must not judge people by outward appearance,” she answered.

“Ah,” said the prince, “a person is beautiful only if she is good inside. I have met many with perfect features who become ugly with evil thoughts. You, princess, are truly beautiful.”

The prince and princess talked, hoping to find some peace for their peoples. They agreed to meet in the forest the next day at dawn. “We will meet at the hut where the Old Woman of the Mountain lives,” the prince said. “In her wisdom, she may find some way to help us.”

Alas, Jaguar was hiding just outside the room and heard what the princess and prince planned. He trembled with fury and knew he must stop them or risk losing his power and his future bride.

At midnight, when the servants discovered the princess was missing, a cry went up in the palace. As King Papantco frantically searched the grounds, Jaguar came to him.

“Your majesty, I will find the princess and she will be returned to you tonight. I wish to marry her upon our return.”

“Of course,” the king assured him.

Meanwhile, the Old Woman of the Mountain greeted the prince and princess, smiling tenderly, for she could see they came in love and peace. But as they knelt before her, seeking her wisdom, she shook her head sadly. “Your families are enemies. You are in grave danger.”

At that moment, Jaguar appeared. The prince stood to greet him, and as he did, Jaguar tossed his magical powder at him. The prince turned to stone instantly. The princess ran to her prince and embraced him, and as she did the powder turned her to stone as well. Jaguar, terrified by this turn of events, ran off.

At the palace, the two kings sat and waited. “If my son is harmed,” Ixtli said, “I will attack your land with every man in my kingdom.”

“Your son shall return,” the high priest said calmly. “My son Jaguar knows where they are hiding. He will bring them home, and you and your son will leave our land forever.”

“And Jaguar will marry the princess,” the high priest continued.

“At once,” said King Papantco.

Then the doors to the king’s chamber opened and the Old Woman of the Mountain stood before the kings, her face red with anger. “I have lived longer than all of your lives together, and now you must listen to me. Papantco, your high priest has brought disruption to this land. He and his son have used their magic to make trouble. The gods will punish them.”

The high priest clapped his hands together, invoking magic to make the old woman disappear. But for the first time, his magic did not work. The old woman laughed. “Priest, you and your son are forever after this day banished to the forest. You will be wild animals in the jungle, always in hiding, living in the shadows.”

“And our children?” the kings asked.

“They shall not return to you until you learn to live in peace,” the old woman answered. “You care only for your bitterness and nothing for your children’s dreams. I have taken them to a place where they will be together, and in peace, forever.”

She pointed out the window toward the east, to two shimmering mountains that now loomed high above the valley. “There stand your children,” the old woman said. “Their names are Ixtlaccihuatl and Popocatepetl.”

They were beautiful, cloaked in soft white snow. And ever since that day, the two have stood side by side in peace while down below kingdoms rise and fall.

Someday, when hatred has left the land, they will wake and live together as husband and wife. Until then they sleep, and the smoke that rises from their summits reminds all those who live below that the prince and princess await a world of peace.