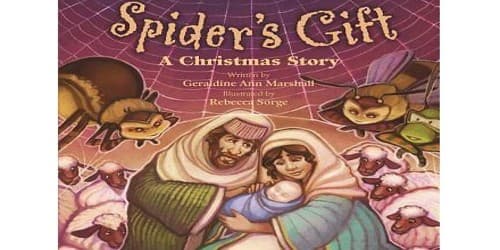 Long ago a boy stood at the spring outside his village collecting buckets of water in earthen jars. Suddenly he saw a spider flailing in the flowing stream, caught in the current. The boy quickly carried the spider to safety. He held it gently, and before long the warmth of his hand brought life to the spider. As if to say thank you, the spider began to dance about on all eight legs. Moments later she was hardy enough to spin six strands of silk from her spinnerets. As the boy watched, the strands grew long and glistened in the morning light. After a while, the boy gently placed the spider beneath a “mate” bush for safety and waved farewell to her. He had much work to do at home.

That night the boy dreamed of the spider, and the next day he visited her. By day’s end, they were friends. The spider grew larger, and so did the boy, and through the years their friendship flourished. Although they could not speak to each other, they spent hours together, enjoying the beauty of the sunlight streaming through the trees.

When he was 18, the young man and his mother stood one day watching the spider dance. Suddenly the young man heard splashing downstream. When he looked up, he saw the loveliest young woman he had ever seen. As she paddled closer, he stared admiringly at her shining black braids and her strong dark arms that seemed to glow in the daylight.

As the maiden paddled past them, the young man looked at his mother. “Who is she?” he asked, and his mother knew when she looked into his eyes that he had fallen in love.

“Her name is Tawakira,” his mother said. “She is the daughter of the chief in the next village.”

A few days later, as the young man gathered berries, he caught sight of Tawakira once again. She wore a white tunic with a purple sash around her waist, and the young man watched as she gathered flowers and wove a beautiful garland for her hair. Gathering courage, he walked to her side and offered her some berries from his basket. Before long the two were talking and laughing, enjoying each other’s company. By day’s end, the whole village was talking of the love the young man felt for Tawakira.

Alas, the chief announced that he would soon choose a husband for his daughter Tawakira. All the warriors and princes and young men from near and far came to hear the announcement, for many loved Tawakira. “Men,” the chief announced, “whoever brings my daughter the most wonderful gift in the world will be her husband.”

When the young man heard this, his heart nearly broke. He knew nothing of faraway treasures. All his life he had worked hard, grinding corn, carrying water, planting crops and making pots. Others had traveled the world. Other young men would bring to Tawakira gifts he could only dream of. Filled with despair, the young man walked to the spring to pray to the gods. When he saw his friend the spider, he told her of his sadness.

By the next day, the young men began to return to the village with their treasures. They brought rugs and plumes, jewelry of rare metals, goblets of the finest silver. They brought brightly colored songbirds and birds who spoke. They brought shimmering stones and beautifully carved wooden boxes. When the young man saw all these gifts, he knew he had lost Tawakira. He returned to the spring and sat upon a rock.

Suddenly he heard a tiny voice. “Look here,” the voice said, and the young man turned. Beneath the mate bush, he saw the spider.

“I am your friend,” the spider said, “and I will make something to help you win the hand of Tawakira.”

The young man stared in amazement. “I never knew you could talk,” he said at last.

The young man could not find the words to thank his friend. He blushed and stammered, and at last, he ran to the chief and bowed before him. He placed the mantle upon Tawakira’s shining dark hair. Everyone gasped, for it was truly the most exquisite gift they had ever seen.

The chief was dazzled. “This young man will marry my daughter,” he said. The drums sounded, and the warriors began to chant, and the people danced and sang in celebration.

All the women of the village tried for years to weave the same beautiful silk on their looms, but no one ever made a mantle so perfect, and so filled with friendship. When Tawakira grew old, she passed the mantle on to her daughter who passed it onto hers, and so on. So it was that the spider’s gift lasted forever.