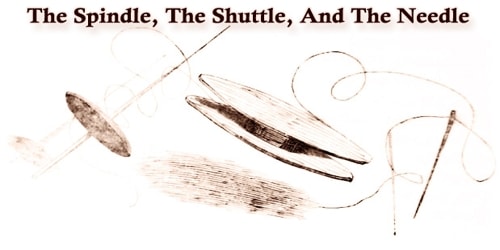 The Spindle, The Shuttle, And The Needle

There was once a girl whose father and mother died while she was still a little child. All alone, in a small house at the end of the village, dwelt her godmother, who supported herself by spinning, weaving, and sewing. The old woman took the forlorn child to live with her, kept her to her work, and educated her in all that is good. When the girl was fifteen years old, the old woman became ill, called the child to her bedside, and said, “Dear daughter, I feel my end drawing near. I leave thee the little house, which will protect thee from wind and weather, and my spindle, shuttle, and needle, with which thou canst earn thy bread.” Then she laid her hands on the girl’s head, blessed her, and said, “Only preserve the love of God in thy heart, and all will go well with thee.” Thereupon she closed her eyes, and when she was laid in the earth, the maiden followed the coffin, weeping bitterly, and paid her the last mark of respect.

And now the maiden lived quite alone in the little house and was industrious, and span, wove and sewed, and the blessing of the good old woman was on all that she did. It seemed as if the flax in the room increased of its own accord, and whenever she wove a piece of cloth or carpet or had made a shirt, she at once found a buyer who paid her amply for it, so that she was in want of nothing, and even had something to share with others.

About this time, the son of the King was traveling about the country looking for a bride. He was not to choose a poor one and did not want to have a rich one. So he said, “She shall be my wife who is the poorest, and at the same time the richest.” When he came to the village where the maiden dwelt, he inquired, as he did wherever he went, who was the richest and also the poorest girl in the place? The first named the richest; the poorest, they said, was the girl who lived in the small house quite at the end of the village. The rich girl was sitting in all her splendor before the door of her house, and when the prince approached her, she got up, went to meet him, and made him a low curtsey. He looked at her, said nothing, and rode on. When he came to the house of the poor girl, she was not standing at the door, but sitting in her little room. He stopped his horse, and saw through the window, on which the bright sun was shining, the girl sitting at her spinning-wheel, busily spinning. She looked up, and when she saw that the prince was looking in, she blushed all over her face, let her eyes fall, and went on spinning. I do not know whether, just at that moment, the thread was quite even; but she went on spinning until the King’s son had ridden away again. Then she went to the window, opened it, and said, “It is so warm in this room!” but she still looked after him as long as she could distinguish the white feathers in his hat. Then she sat down to work again in her own room and went on with her spinning, and a saying which the old woman had often repeated when she was sitting at her work, came into her mind, and she sang these words to herself,

And here to my house bring the wooer, I pray.”

And what do you think happened? The spindle sprang out of her hand in an instant, and out of the door, and when, in her astonishment, she got up and looked after it, she saw that it was dancing out merrily into the open country, and drawing a shining golden thread after it. Before long, it had entirely vanished from her sight. As she had now no spindle, the girl took the weaver’s shuttle in her hand, sat down to her loom, and began to weave.

The spindle, however, danced continually onwards, and just as the thread came to an end, reached the prince. “What do I see?” he cried; “the spindle certainly wants to show me the way!” turned his horse about, and rode back with the golden thread. The girl was, however, sitting at her work singing,

And guide the wooer to me, I pray.”

Immediately the shuttle sprang out of her hand and out by the door. Before the threshold, however, it began to weave a carpet which was more beautiful than the eyes of man had ever yet beheld. Lilies and roses blossomed on both sides of it, and on a golden ground in the center green branches ascended, under which bounded hares and rabbits, stags and deer stretched their heads in between them, brightly colored birds were sitting in the branches above; they lacked nothing but the gift of song. The shuttle leaped hither and thither, and everything seemed to grow of its own accord.

As the shuttle had run away, the girl sat down to sew. She held the needle in her hand and sang,

“Needle, my needle, sharp-pointed and fine,

Prepare for a wooer this house of mine.”

Then the needle leaped out of her fingers and flew everywhere about the room as quick as lightning. It was just as if invisible spirits were working; they covered tables and benches with green cloth in an instant, and the chairs with velvet, and hung the windows with silken curtains. Hardly had the needle put in the last stitch than the maiden saw through the window the white feathers of the prince, whom the spindle had brought thither by the golden thread. He alighted, stepped over the carpet into the house, and when he entered the room, there stood the maiden in her poor garments, but she shone out from within them like a rose surrounded by leaves. “Thou art the poorest and also the richest,” said he to her. “Come with me, thou shalt be my bride.” She did not speak, but she gave him her hand. Then he gave her a kiss, led her forth, lifted her on to his horse, and took her to the royal castle, where the wedding was solemnized with great rejoicings. The spindle, shuttle, and needle were preserved in the treasure-chamber and held in great honor.