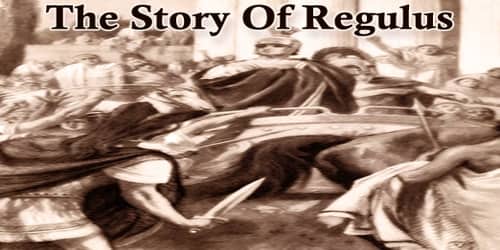 The Story Of Regulus

On the other side of the sea from Rome, there was once a great city named Carthage. The Roman people were never very friendly to the people of Carthage, and at last war began between them. For a long time, it was hard to tell which would prove the stronger. First, the Romans would gain a battle, and then the men of Carthage would gain a battle, and so the war went on for many years.

Among the Romans, there was a brave general named Regulus, a man of whom it was said that he never broke his word. It so happened after a while, that Regulus was taken prisoner and carried to Carthage. Ill and very lonely, he dreamed of his wife and little children so far away beyond the sea; and he had but little hope of ever seeing them again. He loved his home dearly, but he believed that his first duty was to his country; and so he had left all, to fight in this cruel war.

He had lost a battle, it is true, and had been taken, prisoner. Yet he knew that the Romans were gaining ground, and the people of Carthage were afraid of being beaten in the end. They had sent into other countries to hire soldiers to help them, but even with these, they would not be able to fight much longer against Rome.

One day some of the rulers of Carthage came to the prison to talk with Regulus.

“We should like to make peace with the Roman people,” they said, “and we are sure, that, if your rulers at home knew how the war is going, they would be glad to make peace with us. We will set you free and let you go home if you will agree to do as we say.”

“What is that?” asked Regulus.

“In the first place,” they said, “you must tell the Romans about the battles which you have lost, and you must make it plain to them that they have not gained anything by the war. In the second place, you must promise us, that, if they will not make peace, you will come back to your prison.”

“Very well,” said Regulus, “I promise you, that, if they will not make peace, I will come back to prison.”

And so they let him go; for they knew that a great Roman would keep his word.

When he came to Rome, all the people greeted him gladly. His wife and children were very happy, for they thought that now they would not be parted again. The white-haired Fathers who made the laws for the city came to see him. They asked him about the war.

“I was sent from Carthage to ask you to make peace,” he said. “But it will not be wise to make peace. True, we have been beaten in a few battles, but our army is gaining ground every day. The people of Carthage are afraid, and well they may be. Keep on with the war a little while longer, and Carthage shall be yours. As for me, I have come to bid my wife and children and Rome fare-well. To-morrow I will start back to Carthage and to prison; for I have promised.”

Then the Fathers tried to persuade him to stay.

“Let us send another man in your place,” they said.

“Shall a Roman not keep his word?” answered Regulus. “I am ill, and at the best have not long to live. I will go back, as I promised.”

His wife and little children wept, and his sons begged him not to leave them again.

“I have given my word,” said Regulus. “The rest will be taken care of.”

Then he bade them good-bye, and went bravely back to the prison and the cruel death which he expected.

This was the kind of courage that made Rome the greatest city in the world.