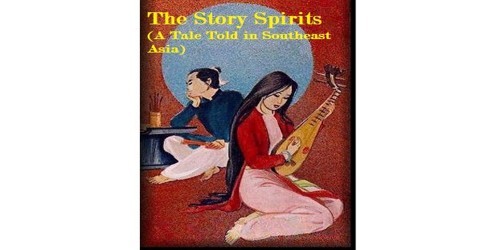 The Story Spirits (A Tale Told in Southeast Asia)

Once upon a time, there lived a boy who loved stories. Each night before Che Low went to sleep, he begged his parents to tell him a story. Soon the parents invited the grandparents to tell the boy tales, and when the family had told the boy all they knew, they invited traveling storytellers to their home.

The boy was in heaven. Each night after listening to a story, he fell into a deep sleep, filled with dreams of magic. Every morning he ran to school to share the stories with his friends.

One day a new storyteller came to Che Low’s room carrying a large silk sack. “This sack has the power to hold stories,” the man told Che Low. “If you hang this in your closet, the stories you hear will never go away. They will be yours forever.”

Sadly, after Che Low had that sack, he no longer shared his stories. Instead, he kept them all to himself, storing them each night inside his sack.

Before long the sack was so full that the stories had no room to breathe. Inside that crowded sack, the story spirits grumbled and jostled each other for space. “Set us free,” they called to Che Low, but the boy had grown selfish and greedy.

Che Low was now a young man, and he decided to marry a young woman he had loved for years. As the family prepared for a festive wedding ceremony at a faraway estate, the stories began to grumble loudly.

One day as Che Low’s grandfather walked past his grandson’s room, he heard strange voices whispering. He tiptoed into the room and looked all about, searching for the source of the sound. Suddenly he realized the voices came from the closet. When he opened the door, he saw the bulging sack and watched in wonder as it twisted and turned.

He pressed his ear to the sack to hear more clearly what the voices were saying.

“He’s getting married tomorrow,” said a voice. “Why should he be happy after causing us so many years of sadness?”

“Oh, how I wish we were free. We would bring such joy to the world,” said a second.

“Help me,” cried a third voice plaintively. “I am suffocating.”

The grandfather opened the sack just an inch, and before he could stop them, three of the story spirits escaped. They flew instantly to the window.

The grandfather quickly closed the sack, but he was too late to stop the three spirits. He went to the window and listened closely to the voices before they flew away completely.

“Aha!” they cried. “Now we shall take our revenge on Che Low!”

“I will turn myself into a babbling brook,” said the first spirit. “While Che Low is traveling to the estate, he will become thirsty, and when he stops to take a drink from me, I will have my revenge, for I shall be a poisoned stream.”

“I have a better plan,” said the second spirit. “I will be a wedding cake. When he takes a bite of me, he will die, for I too will be poison.”

A third voice broke in. “I will be a poisonous snake. I will hide inside their marriage chamber and bite him as he climbs into bed.”

The grandfather knew he must save Che Low, but he also knew his grandson would never believe the story of the spirits. All that night he lay awake planning a way to save Che Low.

The next morning as the wedding procession set off on the path toward the estate, the grandfather insisted that he ride the lead horse. The day was warm, and as they journeyed, Che Low spotted a babbling brook. “Stop here,” he called to his grandfather. “I must have a drink.”

“There’s no time,” the grandfather said and galloped away as fast as he could, leading the other horses after him at a frantic pace.

Later, after the wedding ceremony, the servants carried a huge cake into the courtyard where the wedding party gathered. The guests were delighted, for the cake looked delicious. Just as Che Low lifted the knife to cut a slice, the grandfather ran toward the table. He lifted the cake and tossed it into the dirt, stomping on it and making it crumble into thousands of pieces.

Che Low was furious. “Go away, old man,” he cried. “You have gone mad.” The grandfather bowed his head and walked away.

The party lasted late into the night. At midnight, Che Low and his bride went at last to their bed-chamber. Just as the couple turned down the covers, the grandfather barged into the room.

“What on earth are you doing?” Che Low shouted.

Without answering, the grandfather lifted the rug from the floor. Che Low and his bride gasped when they saw a poisonous snake curled there, ready to strike. The grandfather picked the snake up and tossed him out the window just in time.

Then the grandfather told Che Low about the story spirits. “You imprisoned your stories,” he said to the young man, “and that is wrong. They planned to take revenge on you. You must understand that stories are meant to be shared with all the world.” He handed the still-bulging sack to Che Low.

Che Low was ashamed when he realized what he had done. He opened his sack at once, and that night he shared his tales with his bride. The next day they shared these stories with their friends. As time passed, they shared stories with their children, who in time told the tales to their own children. And so the story spirits were once again free to roam the world, traveling from place to place, giving pleasure to all.